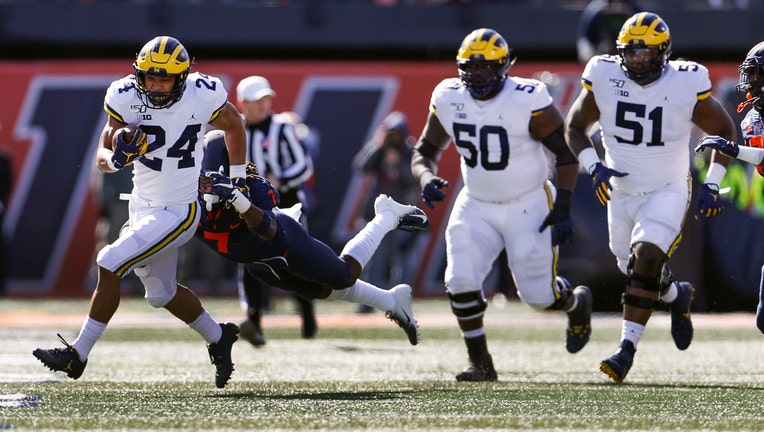 CHAMPAIGN, IL - OCTOBER 12: Zach Charbonnet #24 of the Michigan Wolverines runs the ball as Stanley Green #7 of the Illinois Fighting Illini dives for the tackle during the first half at Memorial Stadium on October 12, 2019 in Champaign, Illinois. (P

CHAMPAIGN, Ill. - A four-touchdown lead had been whittled to three and No. 16 Michigan needed a response to Illinois' 25 straight points.

Shea Patterson and the Wolverines put together a long touchdown drive and the Michigan defense forced two turnovers in a late surge to hold off Illinois 42-25 on Saturday.

"We rose to the challenge," Wolverines coach Jim Harbaugh said. "But yeah, it got interesting for a while there."

Turnovers and ineffective offense helped the Illini (2-4, 0-3) cut the lead to 28-25 with 12:50 left in the fourth quarter when Dre Brown ran in from a yard out. Brown also converted a 2-point conversion.

Michigan drove 79 yards in 10 plays, capped by Patterson's 5-yard touchdown pass to Donovan Peoples-Jones. Patterson sealed it with a touchdown run after Illinois turned the ball over at its 1.

"We are doing a good job taking the ball away. That's giving us a spark," Illinois coach Lovie Smith said. "They pulled away late with us turning the ball over."

Patterson, when asked about the Illinois surge, smiled. "No worries. I mean, we were a little frustrated, but it turned out OK."

Matt Robinson, starting for the injured quarterback Brandon Peters, a graduate transfer from Michigan, was 16 of 25 for 192 yards and one touchdown for Illinois. He also ran for a score.

Harbaugh saw a lot of positives from his team, despite the mid-game slump. "We scored 42 points. We were tested and we put in some hard work," he said. "They made some good adjustments and we just kept fighting. We didn't flinch."

Illinois coach Lovie Smith, who is facing mounting criticism among Illinois fans, saw some positives in the loss and vowed a better second half of the season.

"We're at the half (of the season), and there's disappointment," he said. "But we showed in third quarter, we can change things up. We can do that in the second half of the season as well."

Michigan: Coming off a 10-7 victory against Iowa, Michigan's offense looked a lot better, but Illinois' defense can do that to an opponent.

Illinois: Credit the Illini for coming back against a good defense with a backup quarterback, but the turnovers helped a lot.

Michigan could lose a little ground after a sloppy performance, but probably not much if any.

Michigan: Travels to No. 10 Penn State.