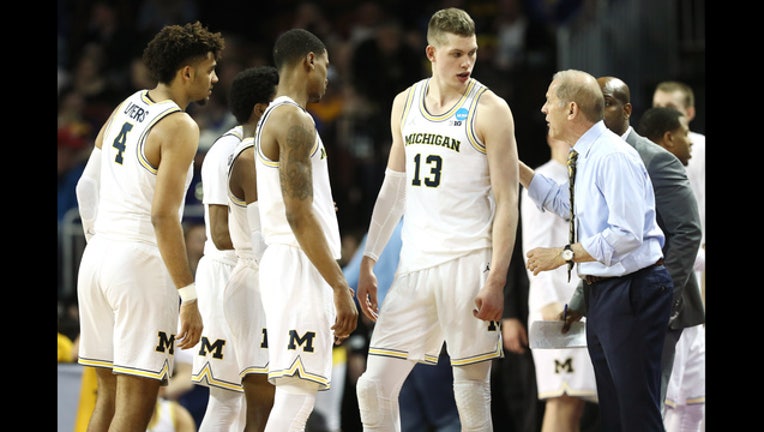 WICHITA, KS - MARCH 15: Head coach John Beilein of the Michigan Wolverines speaks to his players during a delay in the game against the Montana Grizzlies during the second half of the first round. (Photo by Jamie Squire/Getty Images)

WICHITA, Kan. (AP) - Michigan coach John Beilein didn't have to point out to his guys during the first media timeout of Thursday night's NCAA Tournament game against Montana that they had yet to score.

He didn't have to give them a blueprint for a comeback, either.

"Our huddle was like a normal huddle," he explained, "because I really trust these guys to know what's going on. We had to make some adjustments, hang in there, stay consistent with what we do.

"I loved the way we stayed composed during that time."

The third-seeded Wolverines absorbed a big opening salvo from the Grizzlies, then turned to Charles Matthews to lead them back. He poured in 20 points with 11 rebounds, Michigan locked down on defense and pulled away for a 61-47 victory in their first-round matchup in the West Region.

Then, the Wolverines (29-7) methodically drew away over a long period of the second half when No. 14 seed Montana (25-8) failed to score, and chugged into a matchup with sixth-seeded Houston - a last-second winner over San Diego State - in the second round of the tournament.

"That's a good basketball team," Montana coach Travis DeCuire said. "Matthews steps up and has a big game. If you look at it, he was really the difference in the ballgame."

Perhaps the Wolverines were a bit rusty by the long layoff after the Big Ten Tournament, which was moved up a week so that it could be played at Madison Square Garden this year, because it was the plucky Big Sky champions who roared to the game's first 10 points.

"That's an excuse. Not everything can be because of the 10-day stretch," Michigan's Moe Wagner said. "We came out sluggish, and that can't happen. We do that against a different team, show's over."

Michigan's Zavier Simpson played just four first-half minutes because of fouls, and Wagner was scoreless at the break on 0-for-3 shooting, as Montana employed some early trapping.

It took Matthews pouring in 12 first-half points to get the Wolverines on track.

Then it took some stingy defense to pull away.

Wagner scored the first points of the second half, and after Montana's Jamar Akoh answered at the other end, the Grizzlies proceeded to miss their next 12 field-goal attempts. They did not even get to the foul line, which meant a scoreless drought that lasted nearly 10 minutes.

Michigan used the lull to push a 31-28 halftime lead to 44-30 with about 9 1/2 minutes left, and then maintained its advantage the rest of the way in cruising into the second round.

"We can't be negative about the game," Simpson said. "We got the win and that's what it's all about. It's March."

The second half was delayed for about 10 minutes with 17:53 to go when the power running the shot clocks went out. The control board was swapped out and the game eventually resumed.

Montana was 7 of 28 from the field in the second half, and many of the misses were open looks near the basket. That's hardly the recipe for an NCAA Tournament upset, especially against a team in Michigan that entered the dance on a nine-game winning streak.

Michigan never looked like it woke up for the late start, which was pushed back even later because of long early games. The Wolverines will need to do that before Saturday, when they will have to contend with high-scoring Houston star Rob Gray.

Montana rues its fifth straight NCAA Tournament loss while the Wolverines set their sights on Houston, which beat the Aztecs on Gray's wind-milling layup with 1.1 seconds left.