ANN ARBOR, Mich. - ANN ARBOR, Mich. (AP) — Keegan Murray scored 15 of his 23 points in the first half to help No. 24 Iowa build a big lead, and the streaking Hawkeyes went on to beat Michigan 82-71 Thursday night.

The Wolverines (16-13, 10-9) are the only team to beat Iowa since mid-February. Michigan had no shot to win the rematch because it simply could not slow down Iowa's dynamic and balanced offense, especially during the first half. 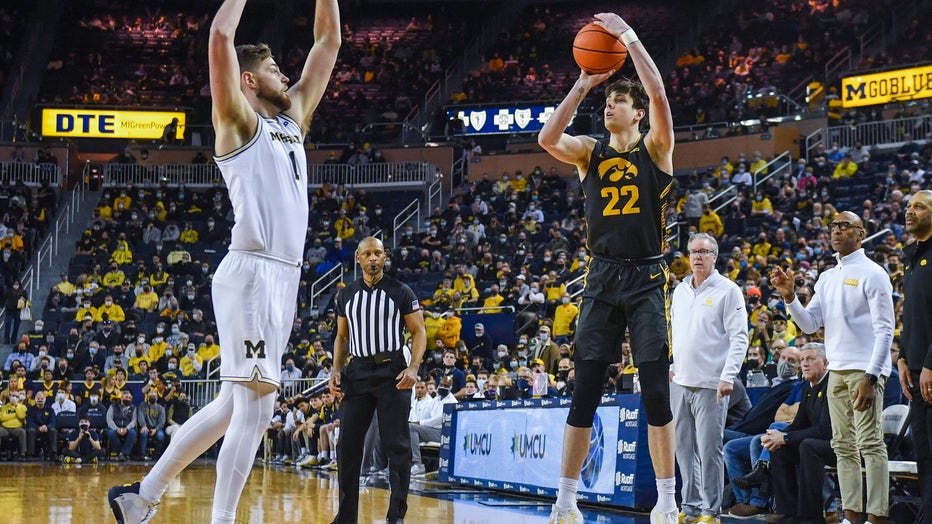 ANN ARBOR, MICHIGAN - MARCH 03: Patrick McCaffery #22 of the Iowa Hawkeyes attempts a three point shot over Hunter Dickinson #1 of the Michigan Wolverines during the second half of a college basketball game at Crisler Arena on March 03, 2022 in Ann A

Over the last seven games, Michigan has alternated between losing and winning.

"We can't continue this pattern or we'll be coming home real early in March," Martelli said.

The Wolverines rallied from a 19-point deficit midway through the second half to pull within seven points with 2:09 to go, but two straight turnovers ended their comeback chances.

"It’s well established that Eli is the leader, but at this point in the year, we need some followers to step up," Martelli said.

The Wolverines were without coach Juwan Howard for the fourth game of his five-game suspension for hitting a Wisconsin assistant in the head.

Howard is eligible to return next week for the Big Ten tournament.

The Hawkeyes took control early and didn't let up.

Murray had eight points in the first four minutes of the game and 13 points midway through the first half, helping Iowa lead 22-9.

Michigan, meanwhile, missed 12 of 15 shots to open its final home game of the regular season.

Wolverines freshman Moussa Diabate, who scored a season-high 28 points, was 0 for 5 in the first half and finished with four points and missed 7 of 9 shots.

"They beat us at home so obviously that gets your attention," McCaffery said.

The high-scoring Hawkeyes led by 17 points at halftime, connecting on 60% of their shots overall and 7 of 10 3-pointers.

After Michigan made consecutive shots to pull within 13 points to fire up fans, Bohannon quieted them in a 14-second span with a pair of 3-pointers.

Jones made a 3-pointer with 5:34 to go to cut the Wolverines' deficit to single digits for the first time since midway through the first half.

"We didn’t panic," McCaffery said. "You knew they were going to keep going. They’re a good team with really good players."

Iowa: The Big Ten's highest-scoring team, which ranks fifth in the country with nearly 84 points per game, is peaking at the right time.

Michigan: A team that started the season with national championship aspirations is closing the regular season on the NCAA Tournament bubble.

Iowa is making a case to move up in the

Iowa: Closes the regular season at No. 20 Illinois on Sunday with Big Ten tournament seedings at stake.

Michigan: Ends the regular season at No. 23 Ohio State on Sunday, possibly needing a win to secure an at-large bid to the NCAA Tournament.