LAS VEGAS - Michigan coach Juwan Howard was hoping a trip to Las Vegas could bring his team together after a tough loss.

It's off to a great start so far.

The Wolverines entered the four-team Roman Main Event tournament coming off a two-point loss at home to Seton Hall on Tuesday. They got to Las Vegas a day early, knowing that the time change and a 9:30 p.m. PST start would play a factor.

"By being on the road, now we get a chance to really grow as a team," Howard said. "If we’re at home after a game, guys are going back to their apartments or dorms. You come back to practice, you have film session, you have your practice. But are you really having time to spend with one another, talking, communicating?" 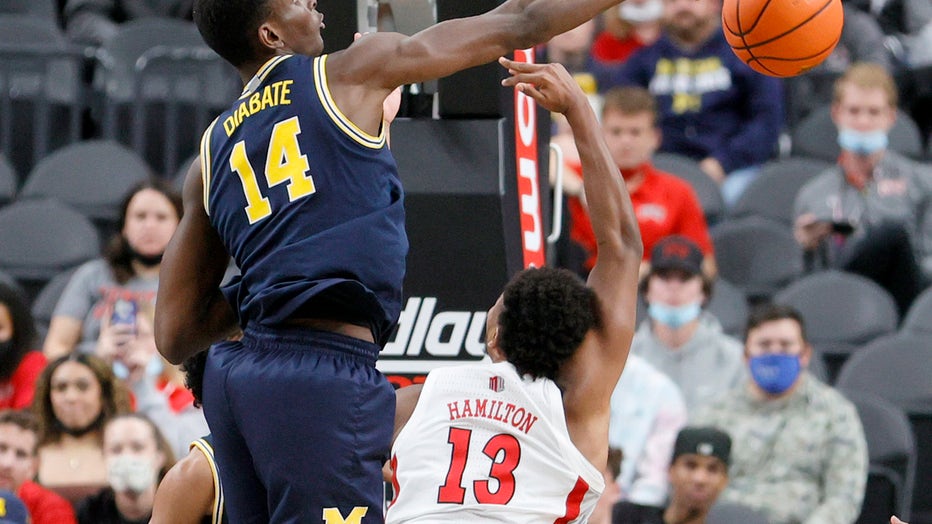 LAS VEGAS, NEVADA - NOVEMBER 19: Moussa Diabate #14 of the Michigan Wolverines blocks a shot by Bryce Hamilton #13 of the UNLV Rebels during the Roman Main Event basketball tournament at T-Mobile Arena on November 19, 2021 in Las Vegas, Nevada. The W

There were no communication issues from Michigan. The Wolverines had 15 assists and shot 51% from the floor. After making only 3 of 15 attempts from 3-point range on Tuesday, Michigan went 6 of 19 Friday and outrebounded UNLV 33-24.

"I think tonight just tested our mental stability," Brooks said. "They went on a lot of runs, and we answered them."

Hamilton scored seven points during a 9-2 run that shrunk Michigan’s lead to 35-32 at the end of the first half. He hit his first 3-point attempt in the second half to tie it at 35. After going 4 of 9 in the first half, Hamilton was held to 5 of 14 in the final 20 minutes and was 3 of 13 from behind the arc.

"They’re an elite defensive team," Kruger said. "They do a really good job with Dickinson and Moussa. They’re always kind of in the back of your mind. Those shots in the paint or those shots that are contested are a little more difficult when you got rim protectors back there."

Diabate shot 6 of 7 in just 14 minutes of action. His first basket was the most memorable.

The 6-foot-11 big man from Paris forced a turnover and started to run at UNLV center David Muoka. Going from left to right, Diabate found an opening down the middle of the lane and dunked it with his right hand over Muoka with 11:58 left in first half.

Despite trailing by single digits for most of the second half, UNLV stayed in the game despite a lack of action at the foul line.

The Runnin’ Rebels did not have their first free-throw attempt until 6:45 left in the game when Royce Hamm Jr. split a pair. He took the only four free-throw attempts for UNLV in the entire game. Michigan finished 16 of 21.

UNLV: It’s been a long time since there was reason for excitement with the Runnin’ Rebels — when Kruger played for his dad Lon in the 2000s. After three wins by six points or less to start the season, UNLV hung tough with its athleticism and timely shot making.

Michigan: The Wolverines showed why they are national championship contenders. In addition to the size advantage with big men Dickinson and Diabate, Michigan’s zone defense suffocated UNLV at times in the second half.