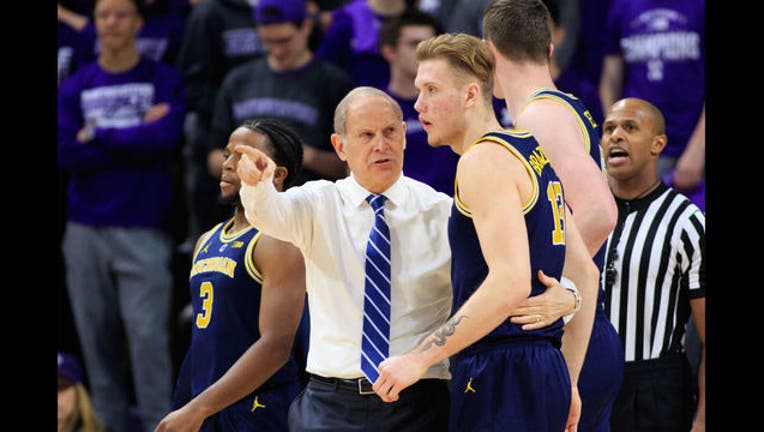 Pushed right to the very end, they delivered.

Poole made two big plays in the last 2 1/2 minutes and Ignas Brazdeikis scored 13 of his 23 points in the second half to help the fifth-ranked Wolverines hold off Northwestern for a 62-60 victory.

"I feel like a game like this brings us even more together, more chemistry, more everything," Brazdeikis said. "So this was really important for us."

Michigan opened with eight straight wins by at least 17 points, including blowouts against Villanova, North Carolina and Purdue. Poole and company appeared headed for another runaway before the Wildcats challenged the Wolverines in the second half.

"I knew we were going to have to go through games like this if we were going to be good," coach John Beilein said. "We survived it - I don't know how - but we made just enough good plays down the stretch."

Poole finished with 15 points as Michigan (9-0, 2-0 Big Ten) added to its best start since it opened the 2012-13 season with 16 straight victories. Zavier Simpson scored 10 points, and Jon Teske had eight points and 10 rebounds.

The game was tied at 58 when Poole fed Teske for a dunk with 2:30 left. After Ryan Taylor made a jumper for Northwestern, Poole drove inside for another dunk that made it 62-60 with 1:53 remaining.

"Being able to make shots late, it definitely gives us confidence if we're ever in a situation like this again," Poole said.

Michigan had a shot-clock violation with 14 seconds to go, giving Northwestern one last chance. Taylor was long on a desperation 3-pointer as time expired.

"We probably could've got a better shot," Northwestern center Dererk Pardon said. "It was contested. We could've gotten a better one, but we're still learning and moving forward."

It was Northwestern's second straight tough loss, including 68-66 at Indiana on Saturday.

"We've just got to close games out down the stretch," Law said. "I don't think it's our offense that's messing up late in games. We just have to lock in and be really sharp."

Michigan appeared to be in control after opening the second half with a 9-0 run to make it 45-30 with 17:19 left. But Northwestern came roaring back.

Pardon's driving layup sparked a 15-2 spurt for the Wildcats. A.J. Turner's three-point play sliced Michigan's lead to 47-45 with 13:16 remaining, sending a charge through the crowd at Welsh-Ryan Arena and prompting the Wolverines to take a timeout.

Brazdeikis helped Michigan settle down, converting a layup to make it 51-45 with 11:30 left. The freshman, who exited for a brief moment in the first half after he was elbowed in the back, went 9 for 18 from the field.

"My teammates mean everything to me and they trust me with the ball in my hands and (to) take those shots," Brazdeikis said. "When they do that, that even builds my confidence even more."

Michigan: The Wolverines had some defensive issues in the second half but helped themselves with a 33-26 rebounding advantage for the game.

Northwestern: Law sparked the Wildcats in the second half, scoring 11 points.

Michigan stays home for the next month, beginning Saturday against South Carolina. The Wolverines' next road game is Jan. 10 at Illinois.