ANN ARBOR, Mich. - ANN ARBOR, Mich. (AP) — Michigan got off to a sluggish start, perhaps peeking ahead to playing Michigan State. Then the Wolverines used a strong finish to seal a matchup of undefeated rivals.

Shortly after the victory, Jim Harbaugh's thoughts had already shifted to facing the ninth-ranked Spartans on the road.

"All focus is there," he said.

"We played pretty solid in the first half to give ourselves a chance," Northwestern coach Pat Fizgerald said. "And, then we reverted back to some bad habits." 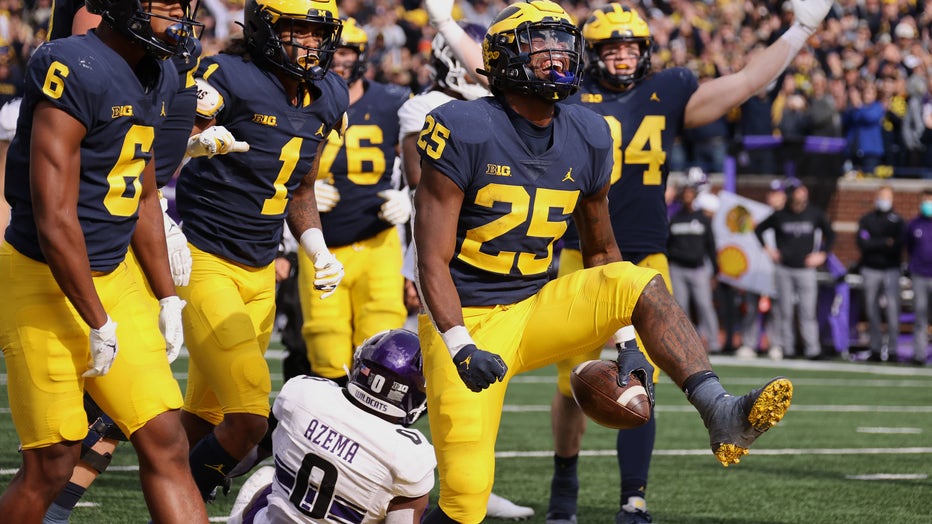 ANN ARBOR, MICHIGAN - OCTOBER 23: Hassan Haskins #25 of the Michigan Wolverines celebrates a second half touchdown with teammates while playing the Northwestern Wildcats at Michigan Stadium on October 23, 2021 in Ann Arbor, Michigan. Michigan won the

Corum jukes defenders with shifty moves while Haskins runs through them with power.

"We both bring different things to the table," Corum said. "We feed off each other."

Michigan had 294 yards rushing, nearly 50 yards more than its average.

"They’re the best rushing offense in the country for a reason," Fitzgerald said.

Cade McNamara was 20 of 27 for 129 yards for the Wolverines, whose inability to throw the ball downfield might prove to be a problem against tougher teams.

Northwestern quarterback Ryan Hilinski, a South Carolina transfer, completed 14 of 29 passes for 114 yards with an interception. He was replaced early in the fourth quarter by Carl Richardson, who was 2 for 3 for 9 yards.

Evan Hull had a 75-yard touchdown run late in the second quarter, making it 10-7 and nearly doubling the yards the Wildcats had in the game at that point.

Down 17-7 midway through the third, Northwestern's Charlie Kuhbander missed a 39-yard field goal.

"There’s a lot of good things we can take from this game, and a lot of things where we let it get away from us," Hilinski said.

Northwestern: The defense, which has improved steadily this season, held a potent offense in check during the first half before wearing down because the Wildcats struggled to sustain drives offensively.

Michigan: Coming off a bye and before playing the Spartans, a lackluster start was understandable even if Harbaugh and his players refused to acknowledge it.

Michigan has won its first seven games for the first time since 2016, Harbaugh’s second season, when it started 9-0 and finished 10-3 with a loss to Florida State in the Orange Bowl.

"That’s the first time he’s been put in that position," Harbaugh said.

The block set up

The Wildcats, a defending division champion, have alternated between losing and winning each game in a challenging season that Fitzgerald is confident will pay off in the future.

"We have a lot of young guys out there who are getting really valuable experience," he said.

The Wolverines won the newly created

"To play for that was an honor," Fitzgerald said.

Jewett played for Michigan during the 1890 and 1892 seasons, then left Michigan for Northwestern in 1893 to finish his medical degree. He played two seasons for the Wildcats.

Michigan doesn't have much room to move up, but will close the regular season with plenty of chances against Michigan State, No. 7 Penn State and No. 5 Ohio State.

Michigan: Plays at Spartan Stadium in a highly anticipated matchup of undefeated rivals.