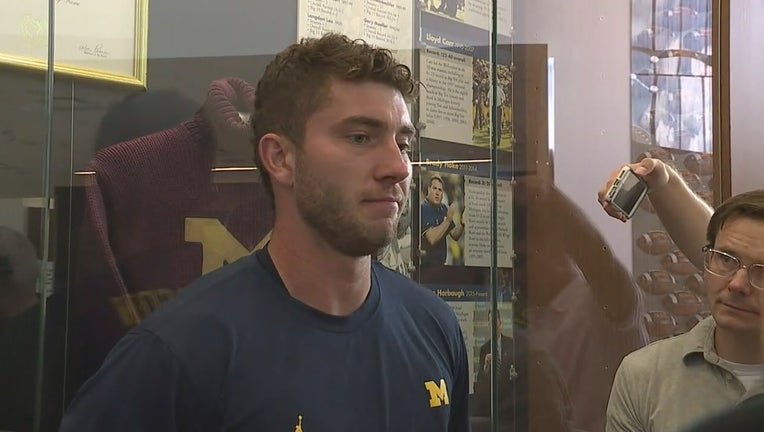 ANN ARBOR, Mich. - Notre Dame and Michigan will meet under the lights shining on their cool helmets and storied programs.

The Fighting Irish and Wolverines have been playing football against each other since 1887 and yet they will meet for just the 45th time.

They haven't played more because breaks have been sprinkled throughout the history of the series.

And, another one is coming up.

No. 8 Notre Dame (5-1) and No. 19 Michigan (5-2) are not scheduled to play again after Saturday night. Even though both athletic directors want to resume the rivalry, it may take about a decade to get them on the field again.

Michigan athletic director Warde Manuel acknowledged future schedules for each school may push the next meeting to 2028 or later.

"We're talking that far away unless something changes for both of us," Manuel told The Associated Press. "We have been in conversations about looking down the road to add another series of games to keep the rivalry moving forward.

"We're both committed to a resolution for our schools, our fans and college football."

Notre Dame athletic director Jack Swarbrick said he has no doubt the programs will play again after they walk off the field this weekend.

"We are committed to playing working together to continue the rivalry," Swarbrick told the AP.

Here are some things to watch when Michigan hosts Notre Dame at the Big House:

The Wolverines have won every home game since closing the 2017 regular season with a loss to Ohio State.

During that visit, the Irish were penalized 12 times, including six times for false starts when Irish players jumped before the snap in the noisy atmosphere created by a large and loud crowd.

Notre Dame coach Brian Kelly shouldered the blame for his team's inability to get off plays using its silent cadence.

"I'm sick about it," Kelly said. "I made a terrible miscalculation in that I felt like our quarterback was prepared, but he wasn't. That falls on me. We'll make sure that never happens again."

Michigan coach Jim Harbaugh and many of his players offered their support for receiver Ronnie Bell, who dropped a pass in the end zone trailing by seven points late in last week's loss at Penn State.

"We would take as many Ronnie Bells as we could possibly get on this team," Harbaugh said. "Mentally, he's as tough as anyone we got and physically the same."

Notre Dame senior running back Tony Jones Jr. enters the game with three straight 100-yard performances and four this season. He is averaging nearly seven yards a carry, ranking among the nation's best.

Jones, though, was limited to 21 yards on nine carries when the Irish threw the ball 47 times in the loss at Georgia.

Jones and Jafar Armstrong were expected to rotate in the backfield this season, but the speedier Armstrong suffered a torn abdominal muscle in the first series against Louisville. Armstrong had surgery and returned to play on a limited basis in last week's win over USC.

"Jafar is going to be an important part of our game plan," Kelly said.

Michigan has lost eight straight games against top-10 teams, dating to a win over Wisconsin three years ago, and is 1-10 in four-plus seasons under Harbaugh.

Even if the Wolverines beat Notre Dame, it won't help them reach a goal of winning a Big Ten title for the first time since 2004, because they've already lost two conference games.

"We're not going to just sit here and be like, 'All right, we're done and coast the rest of the season,'" Michigan defensive tackle Carlo Kemp said.