ANAHEIM, Calif. - ANAHEIM, Calif. (AP) — Shohei Ohtani and Mike Trout homered in the same game for the eighth time this season, but rookies Kerry Carpenter and Ryan Kreidler hit back-to-back homers in the ninth inning to send the Detroit Tigers to a 5-4 victory over the Los Angeles Angels on Wednesday.

Kreidler hit his first career homer off José Quijada (0-4) four pitches after Carpenter tied it with a homer down the left field line into the shortest porch at Angel Stadium.

Eric Haase went 5 for 5 with a homer and two doubles in the majors' 12th five-hit game of the season, and former No. 1 overall draft pick Spencer Torkelson hit his first homer since July 3 as the Tigers snapped their four-game skid and avoided a series sweep with a 13-hit attack in just their second win in nine games. 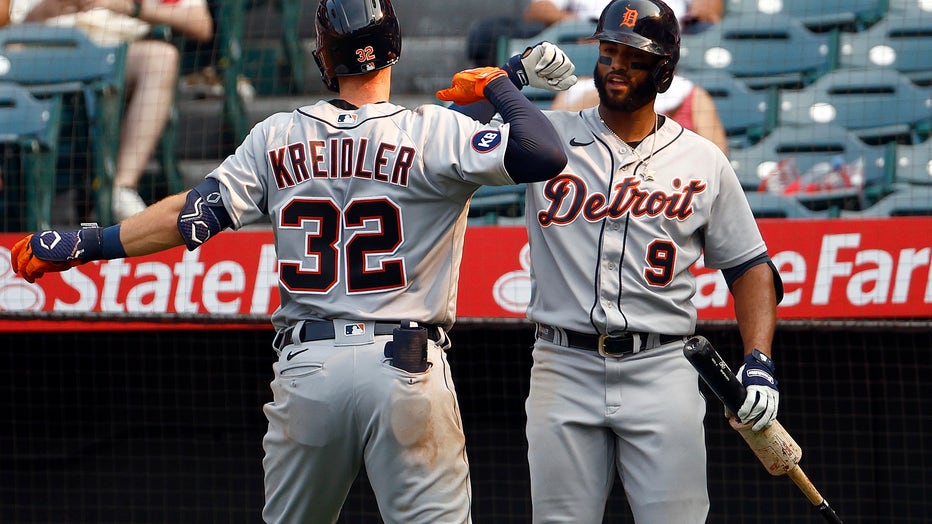 ANAHEIM, CALIFORNIA - SEPTEMBER 07: Ryan Kreidler #32 of the Detroit Tigers celebrates a home run with Willi Castro #9 against the Los Angeles Angels in the ninth inning at Angel Stadium of Anaheim on September 07, 2022 in Anaheim, California. (Photo

José Cisnero (1-0) pitched the eighth, and Gregory Soto allowed two baserunners before finishing his 25th save in a game that began in uncharacteristic 99-degree heat and ended with an all-too-normal Angels bullpen collapse.

Trout homered in his fourth consecutive game during the fifth inning, matching his career record for consecutive games with a homer and tying Ohtani for the team lead with his 32nd. Ohtani surged back ahead in the seventh with his 33rd, a tiebreaking solo shot to right off Andrew Chafin.

The Angels' two former AL MVPs have homered in the same game 22 times in their five seasons together — including twice in the past three games against Detroit.

Matt Thaiss also hit his first homer since 2020 for the Angels, who wrapped up their first winning homestand since early May with an awful bullpen performance. Los Angeles' five relievers each gave up an extra-base hit to the first batter they faced.

Patrick Sandoval held the Tigers to six hits and a run over five innings. The left-hander couldn't match his four-hit shutout with nine strikeouts at Detroit on Aug. 19.

Torkelson’s homer was the latest promising sign from the 2020 draft’s top prospect after a rough start to his career. Torkelson was sent back to the minors around the All-Star break while batting .197, but he returned to Detroit last Friday and then drove in his first run since July 12 on Tuesday night in Anaheim.

Tigers: OF Riley Greene got his second straight day off with a sore wrist. The rookie's 13-game hitting streak ended Monday in the game in which he got injured.

Angels: RHP Michael Lorenzen is slated to rejoin the rotation Friday in Houston. The longtime Reds reliever had an up-and-down beginning to what was expected to be a full season as a starter before he went on the injured list July 7 and missed 56 games with a right shoulder strain.

Tigers: After a day off, rookie Joey Wentz (0-1, 8.10 ERA) is expected to return from the minors Friday in Kansas City. He made his big league debut with two starts in May.

Angels: After a day off, Lorenzen (6-6, 4.94 ERA) returns against the playoff-bound Astros to open the Halos' six-game road trip Friday.