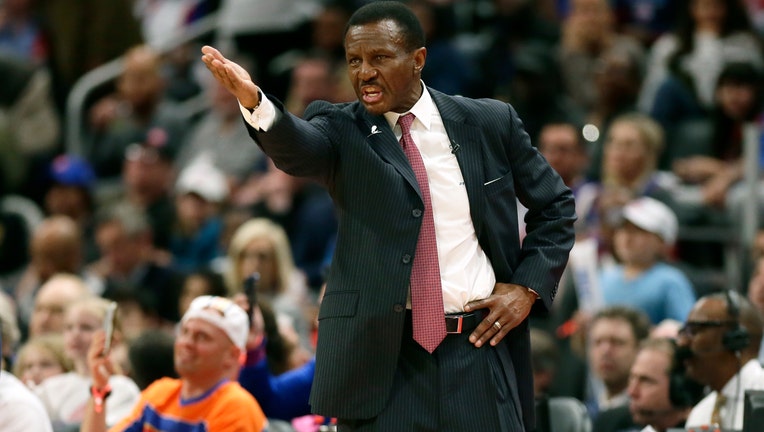 DETROIT, MI - APRIL 22: Dwane Casey of the Detroit Pistons shouts to his team during the second half of Game Four of the first round of the 2019 NBA Eastern Conference Playoffs at Little Caesars Arena on April 22, 2019 in Detroit, Michigan. NOTE TO U

DETROIT - In a league with so many teams either contending or rebuilding, the Detroit Pistons haven't been doing much of either.

What they did do last season was make a playoff appearance, a rarity in recent years. Now the challenge is to build on that.

"Not saying we're ready for a championship, but we're taking some big steps," coach Dwane Casey said. "This is a bridge. We're going across it, to continue to improve offensively, defensively, to get to our ultimate goal, which is to win a championship."

The Pistons have resisted the win big-or-tank model that seems to be all the rage in the NBA. Two seasons ago, they gave up a first-round draft pick in a trade for Blake Griffin. That wasn't enough to put them in the playoffs in 2018, but they made it a season ago and were immediately swept by Milwaukee. There's still a clear gap between Detroit and the top teams in the league, but there's also enough talent on hand that the Pistons could rise a bit in the Eastern Conference.

Last season was only the second playoff appearance in 10 seasons for this franchise. Winning a round would be another step forward.

"We're not here just to get by, or just to get into the playoffs," said Casey, who is entering his second season at the helm. "We want to do big things, and we're building that foundation."

With Griffin and center Andre Drummond under big contracts, the Pistons haven't had much roster flexibility and Detroit hasn't been a prime destination for free agents. If the Pistons are going to make anything more than mild improvement, they'll probably need some unexpected contributions, perhaps from a recent draft pick like Sekou Doumbouya, a first-rounder this year who doesn't turn 19 until December.

Detroit also brought in Derrick Rose, the former MVP who has battled injury problems but may still have some upside at age 31.

"Just to be completely candid, there are teams on paper who are more talented, or have more guys that are regarded as more talented, I guess," Griffin said. "But I think we have the mindset to come in and compete every night, and if we do that - I said this last year - I think the fans, the city of Detroit, the state of Michigan, will get behind us."

Griffin managed to play in 75 games last season, a good number given his spotty injury history, but he began having knee problems at the very end and missed two playoff games. That obviously wasn't ideal, so keep an eye on his minutes this season as the Pistons try to keep him as fresh as possible.

Reggie Jackson has had an erratic tenure with the Pistons. He averaged 18.8 points per game in 2015-16 but hasn't reached that level since. His assist and turnover rates both dropped slightly last season, with Detroit able to run its offense through Griffin if need be. Now Rose has arrived, and although his minutes will probably need to be managed, it will be interesting to see who Casey trusts in crunch time.

Luke Kennard is the only one of Detroit's recent first-round picks still making a significant contribution for the team. He can give the Pistons 3-point shooting and some offensive punch off the bench. Bruce Brown, a second-round pick in 2018, played 20 minutes a game last season, averaging 4.3 points.

Aside from Rose, the Pistons also added a potential contributor in Tony Snell, who averaged 6.0 points for Milwaukee a season ago. Joe Johnson is also with Detroit now, but after not playing in the NBA at all last season, he'd likely be at the end of the roster if he makes the team.

The Pistons have been loath to give up on their current path, sticking with the trio of Griffin, Drummond and Jackson, but a poor start this season could bring about a tipping point. Owner Tom Gores indicated he wants to keep Drummond, but there's been no agreement yet on an extension. It may now be a bit easier for the Pistons to move on from Drummond and/or Jackson if things are clearly going south.