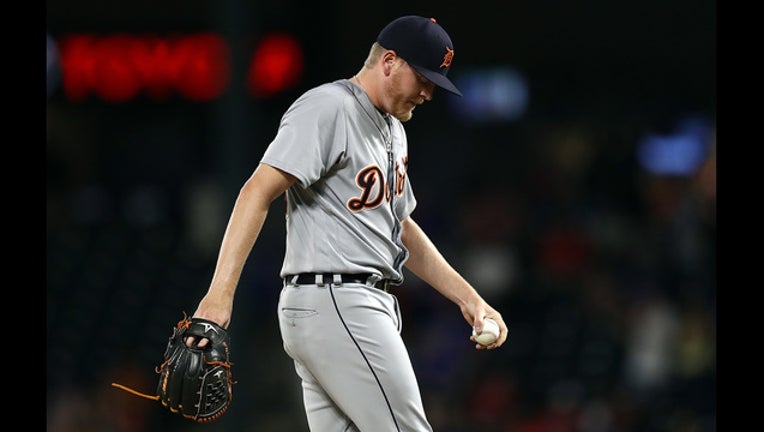 ARLINGTON, TX - MAY 07: Daniel Stumpf #68 of the Detroit Tigers reacts after Shin-Soo Choo #17 of the Texas Rangers scored a run in the seventh inning at Globe Life Park in Arlington. (Photo by Ronald Martinez/Getty Images)

Delino DeShields and Shin-Soo Choo both scored from first in the seventh. DeShields reached on a two-out error and then raced around the bases when Choo singled on a grounder that trickled off the outstretched glove of second baseman Dixon Machado into shallow right field. Profar followed with his big hit.

Detroit blew a 5-1 lead, and then jumped in front again with an unearned run in the top of the seventh after a replay review.

JaCoby Jones ran home from second when Jose Iglesias hit a fly ball to right with two out. Mazara was nearing the line when the ball hit off his glove and dropped into foul territory.

First base umpire Bill Miller ruled a foul ball, but manager Ron Gardenhire challenged the call and the replay showed Mazara was clearly in fair territory. Jones was awarded home to make it 6-5, and Iglesias took first on what became an error for Mazara.

The Rangers won a replay challenge in the eighth when rookie second baseman Isiah Kiner-Falefa was initially ruled off the bag on a double play. On replay, Kiner-Falefa's toe appeared to barely drag across the top of the base when he caught a throw before making the relay to first. That ended the inning instead of Detroit having runners on second and third.

Jose LeClerc (1-0) pitched the seventh, and Keone Kela worked the ninth for his seventh save. Daniel Stumpf (1-2) was the loser.

Texas used four consecutive two-out hits in the sixth to tie the game at 5, including a two-run double by Kiner-Falefa right after Joey Gallo's RBI single.

Mazara's fifth homer in May, and eighth overall, led off the second.

Tigers: 1B Miguel Cabrera jogged in the outfield for the first time since he strained his right hamstring Thursday and went on the 10-day disabled list. "He's getting anxious," Gardenhire said. Cabrera still has another week before he can come off the DL.

Rangers: Drew Robinson was in the original lineup to play second base, but was scratched and placed on the 10-day DL because of left hip soreness. ... 3B Adrian Beltre, who missed his 12th game while on the DL with a left hamstring strain, took some swings and groundballs, and ran the bases. "He's progressing nicely," manager Jeff Banister said.