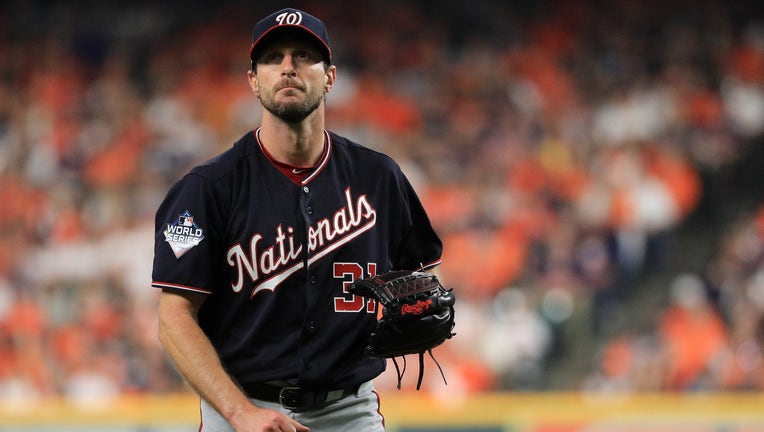 HOUSTON, TEXAS - OCTOBER 22: Max Scherzer #31 of the Washington Nationals reacts after retiring the side in the fifth inning against the Houston Astros in Game One of the 2019 World Series at Minute Maid Park on October 22, 2019 in Houston, Texas. (P

WASHINGTON - Nationals pitcher Max Scherzer was scratched from his scheduled start in Game 5 of the World Series on Sunday night on FOX 2 because of spasms near his neck and was replaced by Joe Ross.

Washington manager Dave Martinez made the announcement 3½ hours before the first pitch.

Gerrit Cole, who went 20-5 in the regular season, starts for Houston, with the Series tied 2-2.

Scherzer, who beat Cole in Tuesday's opener, felt the spasm near his neck and trapezius muscle on his right side Saturday.

"They treated it. He woke up today a lot worse," Martinez said.

Scherzer texted head athletic trainer Paul Lessard on Sunday "that he was really hurting," according to the manager.

"Max, obviously he pitched with a broken nose," Martinez said. "When he comes in and says he's hurt this bad, he's hurt."

Ross has pitched just once in the postseason, throwing 19 pitches over two scoreless innings in Washington's 4-1 loss in Game 3 on Friday night.

"He's got good stuff, and he got his feet wet the other night, so that'll help him," Nationals general manager Mike Rizzo said. "To make an emergency start in Game 5 of the World Series against the Houston Astros, he'll have to control his emotions ... and just follow the game plan and see what happens."

Before Friday he last pitched Sept. 29, starting against Cleveland on the last day of the regular season and getting the win by allowing one run and four hits in six innings while throwing 78 pitches.

"We're going to let him go as much as he can go," Martinez said.

Game 6 starter Stephen Strasburg threw a bullpen session on Saturday and was not an option to start on three days' rest.

"I think everybody is dealing with the effects of a long season," Strasburg said. "So you really just kind of focus on what you can control. Sometimes things are out of your control."

Rizzo and Martinez said Scherzer's injury was not related to the back problems that caused him to go on the injured list this summer and limited him to an 11-7 record with a 2.92 ERA in 27 starts. A three-time Cy Young Award winner, Scherzer had bursitis in his right scapula and a strained rhomboid muscle in the right side of his upper back.

Scherzer said Saturday his back was fine but that he planned to adjust his offseason training after this year's injuries.

In the playoffs, Scherzer is 3-0 with a 2.16 ERA in five appearances, four starts. He labored through five innings in Game 1 of the World Series, allowing two runs and throwing 112 pitches, to get the win.

"I wasn't stunned," Rizzo said. "I was surprised that it worsened overnight. Like a lot of neck or back things, it got worse overnight."