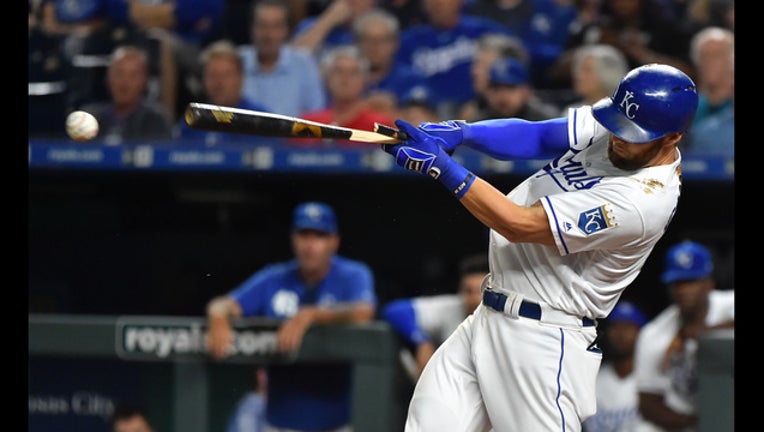 Relieved to have the record in his pocket, a relaxed Soler stretched his total to 40 with a 450-foot shot Wednesday night, and the Kansas City Royals beat the Detroit Tigers 5-4.

The drive left Soler's bat at 115 mph, Soler's hardest-hit homer of the season and the 10th hardest homer in the majors this season.

"Getting No. 40 is really important. But really, I was really happy to get 30," he said through an interpreter. "It felt like I've hit it like that a bunch of times."

Yost said he thought Soler had tensed up recently with the record in reach.

"He's back to being himself," Yost said. "There's a little relief for me. I wanted him to get it. Now every home run from now on he'll break the record. I like that. I'm anxious to see how many he can hit."

Hunter Dozier and Alex Gordon had three hits each for the Royals, who matched their season-best winning streak at four.

The Royals are the last team in baseball history to have a player reach 40 home runs in a season. Prior to Tuesday, Mike Moustakas held the club record with 38 in 2017.

"I had a little better command (late)," Junis said. "I started to throw my slider for a strike, which helped, and then just getting quick outs. They were aggressive. Getting some ground balls, some double plays helped a lot, too. Just staying on the attack."

Ian Kennedy pitched the ninth for his 26th save in 30 chances. He blew his first save in 15 chances Tuesday night against Detroit, but he was perfect Wednesday.

"Boy, he sure did tonight. He was fantastic. That's as crisp as I've seen him in a while."

Detroit scored three runs in the second inning on four consecutive hits. Christin Stewart led off with a single, Jeimer Candelario doubled and Harold Castro drove in both runners with a double. Castro then scored on a single by Dawel Lugo.

After threatening in the third, the Royals scored twice in the fourth. Dozier and Gordon singled leading off, and Ryan McBroom, who made his major league debut Tuesday, collected his first career RBI with a single that scored Dozier and sent Gordon to third. Gordon then scored on a wild pitch.

The Royals added two more in the fifth. Soler's blast off the Royals Hall of Fame in left field tied it. Dozier then tripled off the base of the wall in left center and scored on Gordon's infield hit.

"I thought we swung the bats pretty good," Gardenhire said. "We got a little unlucky on some line drives right at people. But we were in the game. We had a chance. We just couldn't come up with one big hit."

Adalberto Mondesi hit a two-out single in the sixth to make it 5-3.

Miguel Cabrera's RBI single just inside the line in the eighth cut the lead to one.