WASHINGTON - Russell Westbrook had 19 points, 19 rebounds and 10 assists, and the Washington Wizards completed a 106-92 victory over the Detroit Pistons on Saturday night after All-Star guard Bradley Beal's injury-shortened outing.

Beal had 17 points in 21 minutes before the NBA's leading scorer departed early in the third quarter, having started the game with a sore right foot.

After nearly giving back a 30-point lead, Westbrook's NBA-best 15th triple-double helped the Wizards secure just their second win in 10 games since the All-Star break. 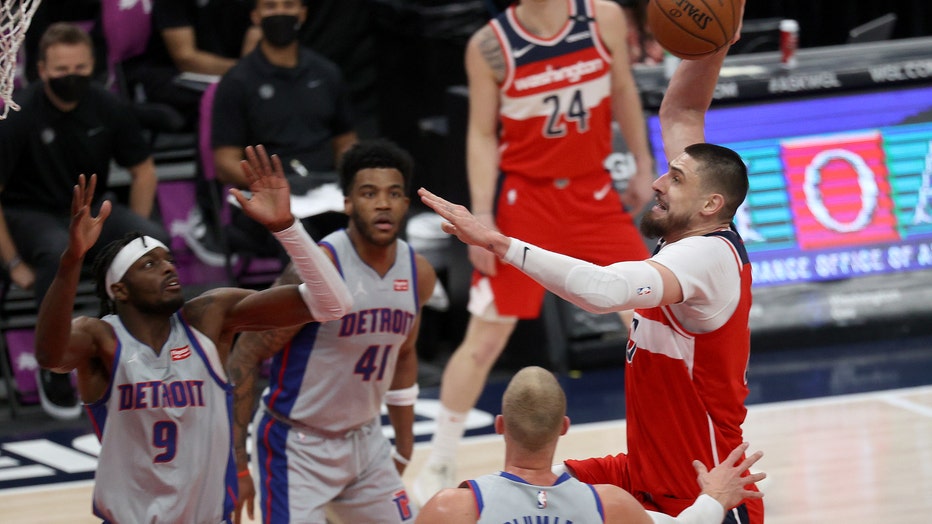 WASHINGTON, DC - MARCH 27: Alex Len #27 of the Washington Wizards puts up a shot against the Detroit Pistons in the first half at Capital One Arena on March 27, 2021 in Washington, DC. NOTE TO USER: User expressly acknowledges and agrees that, by dow

Rui Hachimura added 14 points and Daniel Gafford had 13 in his debut for the Wizards, who began the night in 13th place, four games back of Chicago for the 10th and final Eastern Conference play-in spot.

Wayne Ellington scored 15 points for the last-place Pistons, who have lost four in a row and 14 of their last 18.

Detroit shot 38.8% from the floor and committed 19 turnovers. Its starters were outscored 67-50 despite Beal's early exit.

Beal appeared to pick up or aggravate an injury late in the second quarter on an awkward fall after driving and charging into Detroit’s Saddiq Bey. He remained in through halftime, but was removed with 8:57 to go in the third as Washington held a 74-46 lead.

Detroit immediately responded with a 23-2 run to close the deficit to 76-69, then eventually got the game within a single possession when Isaiah Stewart’s layup cut it to 82-79. But Washington outscored Detroit 24-13 over the final 10:13.

Wizards: Allowed 41 first-half points, their fewest of the season. ... F/G Chandler Hutchinson also dressed, but did not play, after he and Gafford were were acquired Thursday in a trade that sent F Troy Brown Jr. to Chicago and C Moe Wagner to Boston. ... Gafford finished 6 for 7 from the floor and had five rebounds and three blocks.