COLLEGE PARK, Md. - COLLEGE PARK, Md. (AP) — Jahmir Young scored 26 points and Maryland took command of the game over the final 10 minutes to beat Michigan, snapping a five-game losing streak to the Wolverines with a 64-58 victory on Thursday night.

The game tipped off the second-round of Big Ten Conference play. Michigan posted a 35-point rout of the Terrapins, 81-46 in their first meeting on New Year's Day.

Maryland held a two-point lead at the half and Young's layup with 13:15 left gave the Terrapins a 42-38 lead, but Terrance Williams II converted back-to-back layups to tie the game, and the teams traded baskets to keep the game tied at 44-44 with just over 11 minutes to play. 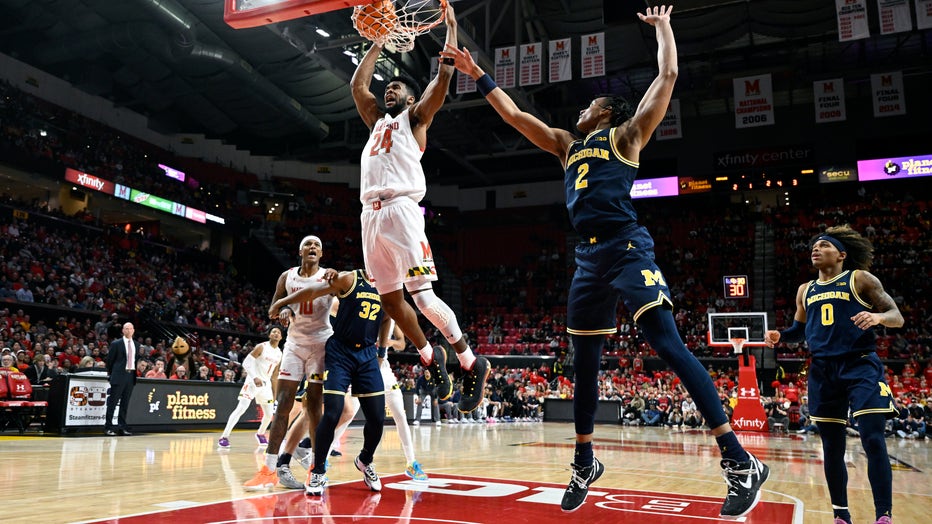 COLLEGE PARK, MARYLAND - JANUARY 19: Donta Scott #24 of the Maryland Terrapins dunks the ball in the second half against Kobe Bufkin #2 of the Michigan Wolverines at Xfinity Center on January 19, 2023 in College Park, Maryland. (Photo by Greg Fiume/G

Hakim Hart hit a 3 and followed a Donta Scott dunk with a layup to put Maryland in front, 51-44. Young threaded his way to the basket for a layup to push the lead to 10 points, 59-49 with 4:30 left before Hunter Dickinson hit from deep, but Dug McDaniel and Jett Howard each missed from deep and Young knocked down 5 of 6 from the line to help close out the win.

Young missed all five of his 3-point attempts but was 8 of 10 from the line with three steals to lead Maryland (12-6, 3-4). Hart finished with 10 points and grabbed five boards and added two more steals.

Dickinson posed a double-double to lead Michigan (10-8, 4-3), scoring 19 points and grabbing 10 rebounds while blocking three shots. Howard hit 3 of 12 from distance and 4 of 14 from the field to add 13 points.

Maryland travels to take on No. 3 Purdue Sunday. Michigan, which now has lost three of its last four games, hosts Minnesota Sunday,