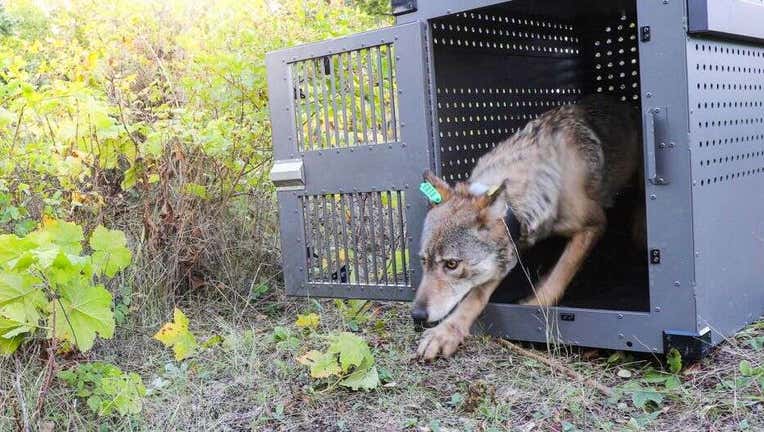 The U.S. Fish and Wildlife Service dropped wolves in most of the lower 48 states from the endangered species list in January.

TRAVERSE CITY, Mich. - A group of scientists urged the Biden administration Thursday to restore legal protections for gray wolves, saying their removal earlier this year was premature and that states are allowing too many of the animals to be killed.

The U.S. Fish and Wildlife Service dropped wolves in most of the lower 48 states from the endangered species list in January. The decision was among more than 100 Trump administration actions related to the environment that President Joe Biden ordered reviewed after taking office.

The move didn't affect Idaho, Montana and Wyoming, where federal protections had been lifted years earlier and hunting is allowed. But it removed them elsewhere in the lower 48 states, including in the western Great Lakes and the Pacific Northwest that have wolf populations, and others where experts say the predators could migrate if shielded from human harassment.

The decision was premature because the species hasn't fully recovered, 115 scientists argued in a letter to Interior Secretary Deb Haaland and Martha Williams, principal deputy director of the Fish and Wildlife Service. High numbers of state-approved killings since then have caused setbacks, the letter said.

"We've been shocked by the way states have been willing to go to all-out war against the wolves," said John Vucetich, a professor of wildlife conservation at Michigan Technological University.

Fish and Wildlife Service spokeswoman Vanessa Kauffman said the agency had no update on wolves. The agency has continued defending their removal from the endangered list against lawsuits filed by environmental groups.

Wolves were wiped out across most of the U.S. by the 1930s under government-sponsored poisoning and trapping campaigns. A remnant population in the western Great Lakes region has since expanded to some 4,400 animals in Michigan, Minnesota and Wisconsin.

More than 2,000 occupy six states in the Northern Rockies and Pacific Northwest after wolves from Canada were reintroduced in Idaho and Yellowstone National Park beginning 25 years ago.

Wisconsin had a court-ordered hunt in February in response to a lawsuit from a pro-hunting group. Participants killed 216 wolves — nearly one-fifth of the state’s population, far exceeding the state’s quota of 119. Another hunt is planned for this fall.

Idaho Gov. Brad Little last week signed into law a measure that could lead to killing 90% of the state’s 1,500 wolves with methods such as using night-vision equipment, chasing them on snowmobiles and ATVs and shooting them from helicopters. In Montana, proposed legislation would allow the use of bait, night-vision scopes and snares.

The states "have clearly indicated that they will manage wolves to the lowest allowable standards," the scientists said in their letter.

"The recent politicization of wolf management in states like Idaho and Montana puts long-term recovery of wolves in jeopardy by reducing the probability of such dispersals," said Jeremy Bruskotter, a wildlife policy professor at Ohio State University.

The Fish and Wildlife Service contends it’s not necessary for wolves to be in every place they once inhabited to be considered recovered.

Livestock farmers and ranchers contend wolf numbers are too high and threaten their livelihoods.

Lawyers representing the government and groups suing to restore federal protections agreed this month to a scheduling plan intended to get matter resolved before hunts that might take place this fall.