All three of Angie and Aaron Rush’s sons have been diagnosed with the same rare form of eye cancer, called retinoblastoma.

ATLANTA - A family in Atlanta has been faced with a devastating diagnosis of cancer not once, but three times, in all of their young sons.

Tristen, 5, Caison, 3, and Carter Rush, 7 months, have all received treatment for retinoblastoma, a rare form of eye cancer that most commonly affects young children — and can be hereditary.

Their mother, Angie Rush, was diagnosed with the same cancer as a baby, and today is healthy.

"I had been told by doctors most of my life that because of the genetic mutation with the retinoblastoma that I have in both eyes I had a 50/50 chance of passing it on," Angie Rush told "Good Morning America." 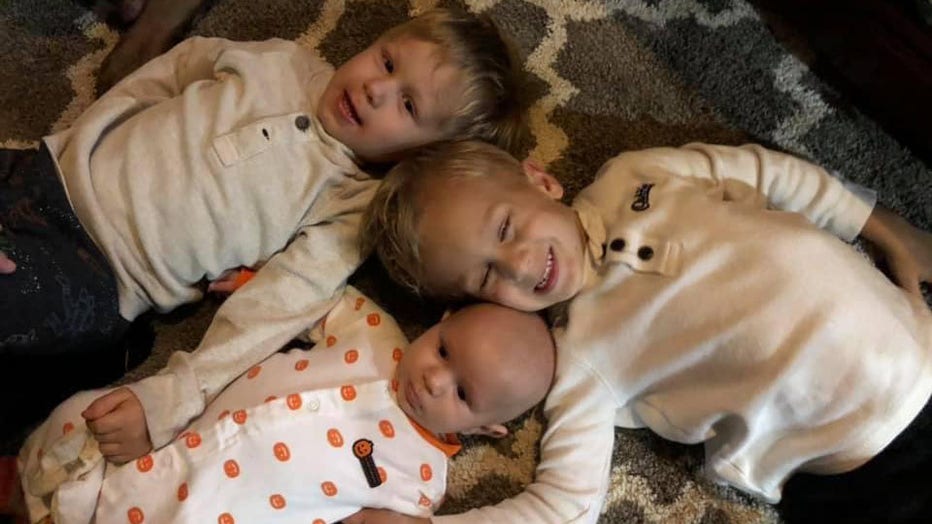 Tristen was first diagnosed with retinoblastoma in 2014 at only 4 weeks old, and his parents, Angie and Aaron Rush, began their now years-long relationship with the Children’s Hospital of Atlanta.

“Every month, they would take him to CHOA for his chemo treatment, Evaluations Under Anesthesia, MRI’s, and laser treatments. But that was just the beginning of their relationship with CHOA,” a GoFundMe page set up by Aaron’s mom, Jeanne Rush, states.

In 2016, their second son, Caison, was born with retinoblastoma — and the cycle of treatments began again.

“Six months ago, Carter was born, cancer free, until January 6th, when a two tumors were discovered in his eyes,” the GoFundMe page states. “They are about to embark on this cancer journey for the third time.”

Carter just started his first round of chemotherapy. The older brothers, Tristen and Caison, are both doing “really well” and have not developed any new tumors as of recently — but still go for regular check ups and MRIs, Angie Rush told HLN.

“It was a shock, and it was a surprise, it was very emotional,” their mother told the network. “It’s hard to handle sometimes, but they are such a blessing and they’re so happy.”

Dealing with massive medical bills for all three children, the family was forced to sell their home and move in with relatives to pay for the cancer treatments.

“As you can imagine, the ‘unknowns’ of dealing with cancer are stressful enough without the added financial stress associated with the numerous doctor visits, hospital stays, and missed time from work,” the GoFundMe states. “Every day they walk by faith believing that the Great Physician knows their every need. Please keep this family in your prayers as they face each new challenge associated with childhood cancer head on.”

The family hopes to further raise awareness about pediatric cancer and the need for more funding. According to the National Pediatric Cancer Foundation, only 4% of the billions of dollars spent annually on cancer research and treatments are directed towards childhood cancer.

On average, 43 children each day are diagnosed with a form of cancer — and the average cost of a hospital stay for a child with cancer is $40,000, according to the foundation.