"Well my mom grew my heart with a piano inside it," he said.

Blind 7-year-old is a music sensation

He was only a toddler when he taught himself to play the piano - by ear.

"So you just put your fingers on the keys and started playing, you just start playing like (this)," he said.

But what's even more incredible, Avett was born blind.

"He couldn't even walk and he would pull himself up to the keys playing melodies," said his mother, Sara Moore. "About 4 years old the world discovered him."

His mom Sara Moore says Maness begged her to record him performing, playing piano and singing. it didn't take long for this little boy from Ohio to become a viral sensation.

"The moment it kind of hit me is when the world was sharing his videos YouTube videos went viral," Moore said. "That's when I was like, OK."

Avett was soon invited on national talk shows, even American Idol, where he met his one and only.

"My favorite thing when I went on American Idol I met Katie Perry," he said. "I mean I asked her for her phone number."

"She gave me the wrong number," he said. She is supposed to babysit and she hasn't fulfilled her end of the bargain, Avitt isn't too happy about it.

But as you can probably tell, nothing is going to stop this 7-year-old from following his dreams. Something that inspired his mom to write a book called "Cotton Candy Clouds." Avett is the little rabbit wearing glasses in the story.

"I had this pen in my pocket and I was like Cotton Candy Clouds kind of came out in an hour," Moore said. "I had this beautiful story about the journey through the clouds, what they would feel like taste like, smell like, he loved me to read it to him, so I brought it to life."

Avett and his mom have since partnered with Seedlings in Livonia. Seedlings believes in providing resources for visually impaired children and helped produce their book in braille.

Many gathered there to watch the pint-size piano prodigy perform. And it wasn't clear if they were more impressed by his playing or his dynamic personality. 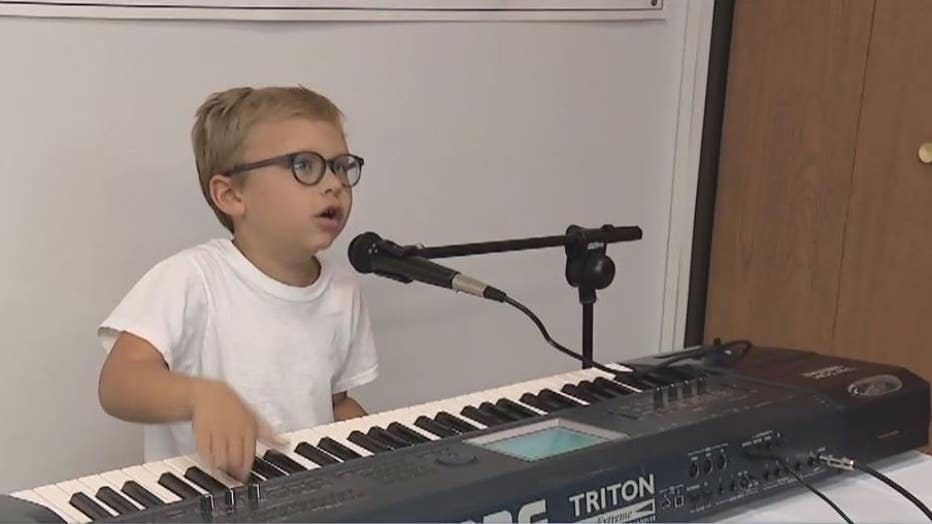