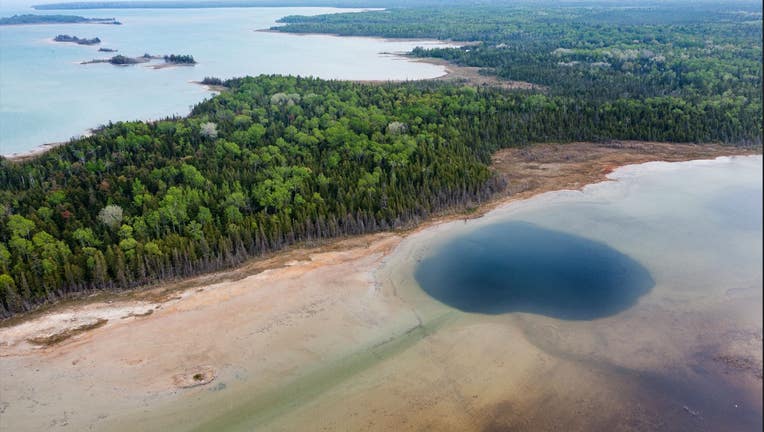 Many of Michigan's sinkholes are concentrated in the northeast portion of the state's lower peninsula. They're part of a network of cave systems called the Detroit River Group. (Photo credit: Coulter Stuart)

ALPENA, Mich. (FOX 2) - It can be easy to forget how extensive Michigan's cave networks span. Much of it remains unexplored even after decades of geologic surveys of the state.

But every so often, residents that live near them are reminded of what lies below.

Tyrone Black who worked as a geologist would hear from residents about underground rumblings beneath their feet. The sounds of rocks falling would wake up people in the middle of the night.

"We know from sinkholes and the flow of water, there's a cavernous system down there," he said. "But as far as locating it from the surface, that's extremely difficult to do even with current technologies."

Caves, sinkholes, and swallows are sometimes called karst features, a geologic term that refers to expressions left on rock by water. In Michigan, the largest karst network is called the Detroit River Group and is located in the northeastern portion of the lower peninsula, where the largest concentration of suspected sinkholes is located.

It's in this spot near Alpena where FOX 2 photojournalist Coulter Stuart spent time scuba diving and repelling into collapsed holes across the region, venturing into caverns whose existence is rarely known, let alone explored by citizens and scientists.

How do sinkholes form?

The creation of sinkholes happens due to the slow trickle of water over thousands of years. They may feel like giant holes but are closer to collapsed caves.

As water falls on the surface and percolates through the soil, it becomes more acidic. The water will descend as far down as 900 feet where it comes into contact with an array of minerals that dissolves in the acidic water.

The process that unfolds eventually thins out the layer of soil separating the world above from the dwellings below. Once that layer weakens enough, it'll break.

"When you have a collapse, it starts as a smaller opening," said Tyrone Black. "It's a dome ceiling that the roof is collapsing off of. "

MORE: Jellyfish in Michigan? Here's how they found their way to Brighton

Black knows of another sinkhole in the Detroit River Group that's been forming for decades. After being discovered with a three-foot diameter, Black said the opening has grown to 35-40 feet.

As water erodes the gypsum and limestone below, the sides of the cavern fall away. When a sinkhole first opens, the eroded walls expand out like a bell, Black said. "Eventually, the top that's leaning out over the space of the collapsed area will fall off." 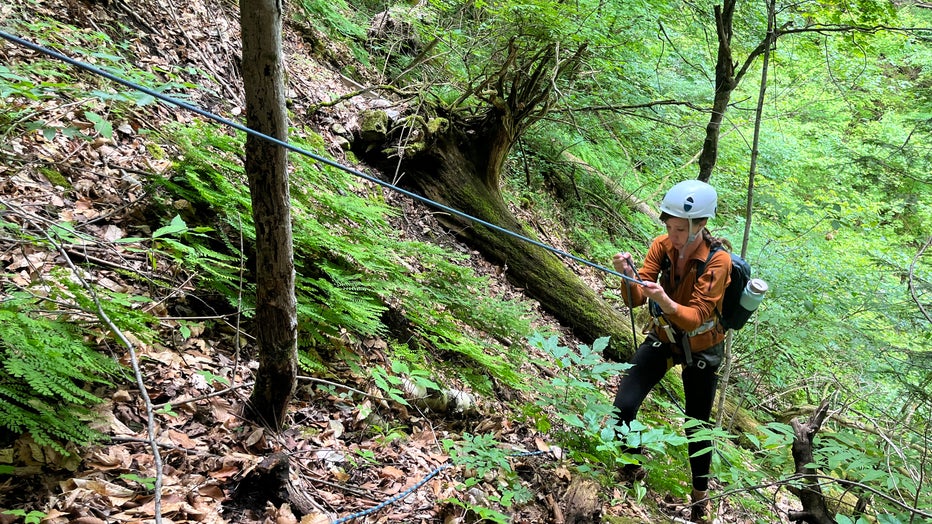 The sinkholes that formed in Michigan were created with the help of glaciation. The last glacier that retreated from Michigan did so 12,000 years ago, finally leaving northern Michigan around 9,000 years ago. As it receded, the glacier eroded away many of the water-formed landscape above ground.

Among the spots that were visited was El Cajon Bay near the Alpena Nature Reserve, where a sinkhole just below the surface descends several hundred feet down.

On the sinkhole floor, there's plenty of sulfur and salt, but almost no natural light or oxygen. Despite the harsh conditions, life thrives in the form of microorganisms called cyanobacteria, which feeds on the elements spewed from the underwater springs. 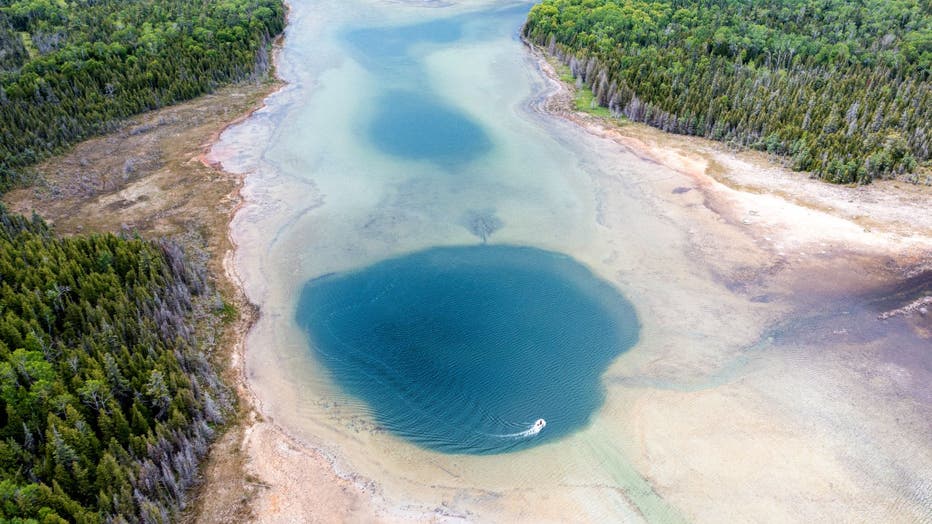 Aerial footage over El Cajon Bay, near Alpena. The sinkhole is continuously fed by vents at the bottom of the column.  (Photo Credit: Coulter Stuart)

The systems on display are similar to life on Earth millions of years ago.

The El Cajon Bay sinkhole is significant because it's one of only three spots identified as discharge points for underground water. The other two spots are Middle Island - which lies off the coast of northeast Michigan - and a sinkhole that's 15 miles northeast of Alpena that is on private land.

The discharge points represent the openings that rivers and groundwater enter as they leave the cave network.

MORE: Did a new home in Oakland Township kill a 500-year-old tree?

There's likely other discharge points where water from the Detroit River Group exit through. But locating these points can be nearly impossible, according to Ty Black.

A different kind of phenomenon is playing out 20 miles west of Alpena at Bruski Sink. Instead of being covered by water, this crevice is shrouded in foliage between multiple farm fields.

In order to access the bottom, one needs to rappel through overgrowth that might look similar to the surrounding trees and plants that grow in northeast Michigan. In fact, they're species of plant not found anywhere else in Michigan.

Because the conditions are cooler and have more moisture further down in Bruski Sink, other kinds of plants like moss and ferns thrive. They look more like the vegetation that would have inhabited the area when glaciers were still carving out the Great Lakes.

"What we found is our sites where these rare ferns were growing are on average about 14 degrees Fahrenheit cooler during the warmest months," said Dr. Susan Fawcett, a research botanist at the University of California, Berkeley. 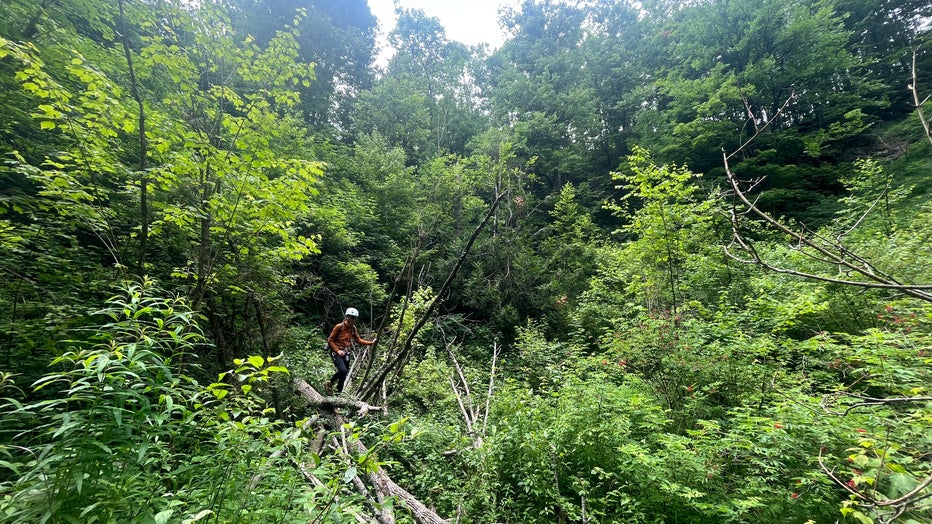 Fawcett specializes in ferns, having researched them around the world. She says sinkhole habitats are particularly important for conservation because they support plants one might not find anywhere else.

"What these places represent is just an incredible refugium on the landscape from climate change and can be totally essential for rare plants to be able to hang on during climate change," she said. "So protecting places like this that have unique climate is absolutely essential."