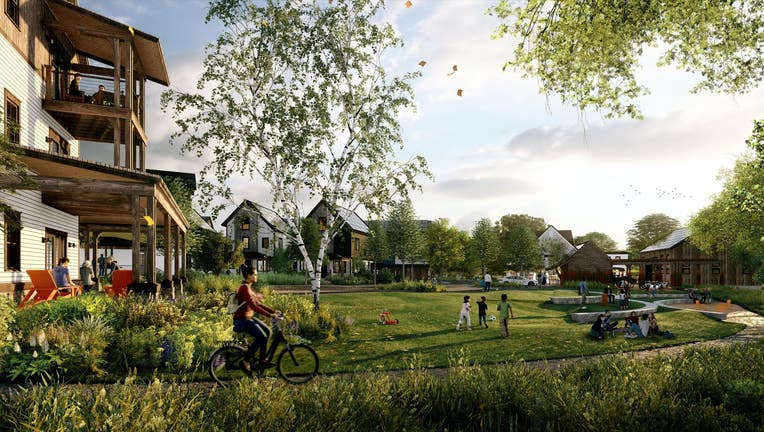 Renderings of net-zero neighborhood at Veridian at County Farm. Design by Union Studio and Rendering via McLennan Design

ANN ARBOR, Mich. (FOX 2) - Matthew Grocoff achieved his energy goals in 2014 when he disconnected his gas lines, installed solar panels, and purchased an electric vehicle. It was the goal of him and his wife since 2006 to go all electric.

It was an energy transformation he mistakenly thought everyone would be making.

"When we paid our last utility bill in 2011, I thought everybody was going to be doing this," he said. "I was thinking 'there it is. We proved it's possible.' But people looked at us as outliers and the exception."

Grocoff is certain the appetite for a fossil fuel-free lifestyle that was missing 10 years ago is now wetted and ready for more. A 13.5-acre plot of land in Ann Arbor will be the site of one of the country's first-ever net-zero neighborhood.

It's being built in County Farm Park, a 130-acre section of land southeast of Ann Arbor. Before it was the site of a renewable living haven, it was home to the Washtenaw County Juvenile Detention Center, which was torn down in 2013.

Every residence being built in the Veridian at County Farm ecovillage will be powered by solar panels instead of oil and gas. The homes will be warmed using heat pumps instead of furnaces. Batteries will also store any unused power for later.

"Each home is designed to produce all the energy the home needs," Grocoff said. "They're designed to have enough solar production as you'll use in your home."

The neighborhood, which will be made up of 160 units in total, will operate completely disconnected from gas. As pumps move thermal energy to warm the home, induction stovetops will boil water and cook food - a facet of the net-zero project that excites Grocoff the most.

"It's like magical engineering," he said. "It's cleaner, adds healthier indoor air quality, there's no carbon monoxide, a lower fire risk, and the performance is the dream of a home chef."

It's also more efficient and cheaper. Grocoff said residents will save up to $3,000 a year by conserving about 60% of the energy that would be used in another home. The neighborhood will produce about 1.3 megawatts every year. Ideally, any of that energy that goes unused would be instead diverted toward charging electric cars.

READ NEXT: How much money does someone need per hour to afford to live in Michigan?

The vision for Grocoff is to create a neighborhood full of residents with different income levels living next to each other. Some will have experienced homelessness while others will be families or retirees. Instead of a community where the price ranges of the homes can influence segregation by pricing out low income earners, Veridian at County Farm will feature a diverse range of incomes and families.

That mission is part of a larger objective to be a model for sustainable living.

"Someone had to go first and it may as well have been us," said Grocoff.