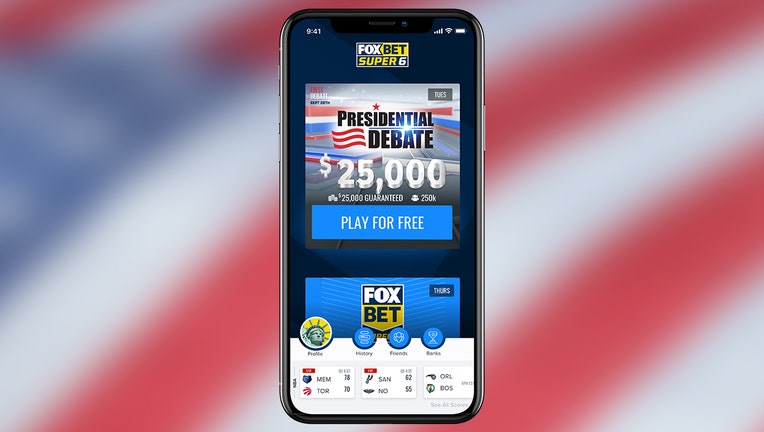 LOS ANGELES - For the first presidential debate of the 2020 election, FOX Bet Super 6 is giving viewers a new way to engage in the discourse that could put some cash in their pockets.

FOX Bet Super 6, a free-to-play app typically focused on sporting events, will allow its users to bet on outcomes during the debate on Tuesday, Sept. 29.

Users can win prizes if they make accurate predictions about the first presidential debate between President Donald Trump and Democratic nominee Joe Biden as they face off for the first time in Cleveland.

Will Trump and Biden air-five? Will they fist bump? Which person in attendance will be the last one to say “America” in the debate?

These are just some of the possible questions. If a lucky user answers correctly, they could cash in on winnings from a $25,000 prize pool split across top performers of the upcoming contest.

FOX Bet Super 6 has already given away more than $1.4 million since it first launched in September 2019, primarily to winners who made correct predictions of its weekly NFL contest. The app is currently the top free-to-play sports game prediction app in the country and is available on iOS and Android platforms.

“We know all eyes will be on the September 29th debate, as they should be in America, and encourage everyone to tune in” said FOX Bet interim CEO, Kip Levin. “Our Presidential Debate Game on our free-to-play FOX Bet Super 6 app will be an entertaining way for viewers to take in the debate, test their knowledge on what will be discussed, and have some fun with the event.”

Download the app and tune in to the presidential debate game here.

FOX Bet Super 6 is available nationwide with the exception of Washington state.

FOX Bet is an online and mobile sportsbook originally developed through a first-of-its-kind national media and sports wagering partnership in the United States between The Stars Group Inc. and FOX Sports, a unit of Fox Corporation. FOX Corporation is the parent company of FOX Television Stations. On May 5, 2020, Flutter Entertainment Plc announced its acquisition of and subsequent merger with The Stars Group.