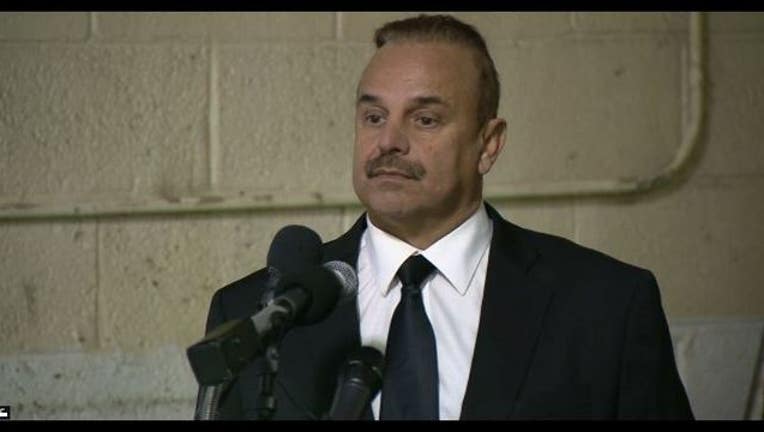 (WJBK) - After Mayor Duggan said Robert Carmack told him he would release embarrassing information on him Wednesday, the Detroit businessman did not release information of that type, but instead played city council meetings that he says show corruption.

Auto shop owner Robert Carmack claims the city and Mayor Duggan tore down one of his buildings and are trying to evict him from another to punish him for being outspoken about public corruption.

Carmack's attorney Steve Haney says the allegations that Carmack threatened the mayor and his family are "baseless and categorically untrue," and a ploy to keep Carmack quiet.

"We bare witness to a thin-skinned public official who is threatening to utilize the services of the Michigan State Police to shield himself from public criticisms," he said.

He says Carmack has the right to release any information he wishes, with the purpose of defending his name.

Carmack opened by saying his struggles with the city has been traumatic for him.

"It's been 15 years of misery what city government has done to me ... I was just trying to do something good for southwest Detroit," he said.

He says it started with a 28-acre condominium project on the riverfront he wanted to develop because people said their businesses were being broken into and the needed a gated place to stay safe.

"I have done what the city asked me to do. i gave them everything they asked me to," he said.

Carmack says he has documentation illustrating his history with the city, then showed video clips of city council committee sessions regarding Carmack's involvement in land purchases in Detroit. The focus was primarily on 2015 discussion in a planning and economic development standing committee meeting on a property purchase issue with that riverfront area.

On Monday, Mayor Duggan held a press conference announcing he's asking police to investigate Carmack's alleged threats to him and his family.

Duggan explained in detail about their issue over a 10-acre parcel of land on Melville Avenue. He says a deal was drawn up in 2007, but Carmack walked away, and in 2016, Carmack tried to use those documents to show he owned the property fraudulently and he sold it.

The city filed a lawsuit, Duggan says, and Carmack hired a private investigator to follow him for months.

"We didn't drop the city's cases, and Carmack dropped the bomb. In the last week, the threats against me and my family to release even more embarrassing information has intensified," Duggan said Monday.

He said a Carmack associate then told them embarrassing information against the mayor would be released Wednesday.

"No matter how painful the consequences may be, I am not going to give in to these threats," Duggan said.

However, during the Wednesday press conference, Carmack showed city council meetings he was involved in and what he calls corruption in the city government.

He said he hasn't been contacted by the Michigan State Police. He says something happened in the last week and he doesn't want to release what he has "because I don't want to incriminate myself any which way."

What exactly is that?

"I just can’t tell you exactly but it's going to come out," he said.

Carmack said in about a week. When asked about hiring the private investigator, his lawyer says Carmack did nothing illegal, and if he chooses to release information that puts the mayor in a negative light, he has the right to do so.

He was again asked why he wouldn't release the information.

"I am afraid. I have three kids to take care of," Carmack said.

When asked about hiring the private investigator, his lawyer says Carmack did nothing illegal, and if he chooses to release information that puts the mayor in a negative light, he has the right to do so.

Carmack's lawyer says there will be a legal process with a judge in the middle of January to try to resolve the disputes.

Carmack did say, however, he does have video and recordings that could embarrass the mayor.

FOX 2's M.L. Elrick will have more on Carmack's presser in tonight's news.