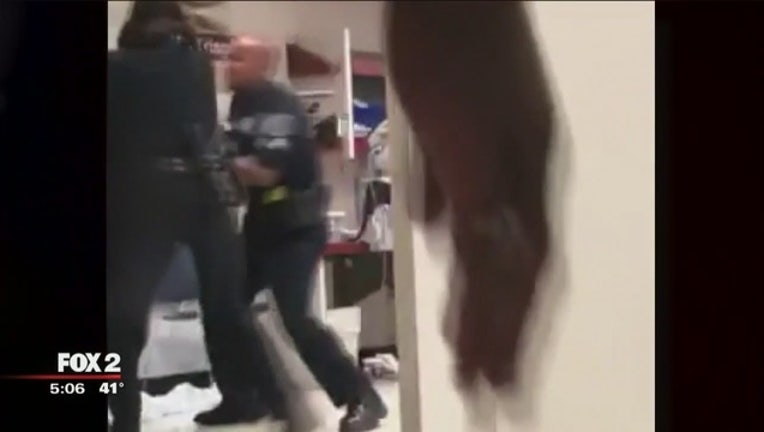 (FOX 2) - A felony charge against a Detroit police officer who was recorded punching a woman with a mental illness at Detroit Receiving Hospital was dropped Tuesday.

The extremely graphic video shows the naked woman pummeled multiple times by Jones while other officers are holding her. The woman was naked and cursing, and was being restrained by officers. It appears when she started spitting, the officer started punching.

In court it was revealed that Jones and his partner Stacey Taylor went to pick up the woman after they got a call that she was at Grand River and Trumbull naked.

The defense suggested Jones had to in order to get her under control The Detroit Receiving Hospital officer who said the woman bit him said after Jones used the hard strikes, she was not subdued and was still combative.

Jones' partner testified the woman has a history of mental illness. She had been picked up before for allegedly for trying to light her garage on fire.

On Tuesday, when making her decision, Judge Miller said it was important to look at more than the 11-second video.

The judge said as they picked her up from the street, naked and yelling, she said Jones and his partner exhibited nothing but kindness and professionalism. Once arriving at the hospital, Jones went and got a sheet to cover her up.

As they're sitting there, the judge said the woman is yelling and using vulgar language, "but she's relatively peaceful." She said the woman was talking about Lucifer, and how she'd been to Hell and is back to tell people not to go there.

"Her clear mental illness at that time was evident," Miller said.

The judge said Jones walked around the desk with open hands, and the woman took a fighting stance with balled fists, cussing at him. Jones called for the DRH officer, as they tried to put on handcuffs. She said Jones maintained his composure as he tried to calm the woman down, telling her to relax. She bit the DRH officer.

Miller said while he swung more than a dozen times, he only connected with her about 8 or 9 times in that 8 seconds, but that whole time she was fighting him.

"One little, itty bitty woman but who is mentally ill, unstable and completely out of countrol ... that was the circumstances of that situation. I cannot separate everything else and just go, oh, he hit her. Yeah but why? What was going on? What lead up to that?" Miller said.

The judge said he then gaine control by putting his arms around her, and took her over to a gurney to be restrained.

"He immediately stopped.... He never cussed at the woman, he never called her a name. He was never disrespectful," she said.

She said if he was out of control or acting with malice, he would have attacked her and would not have gone to make sure she was OK.