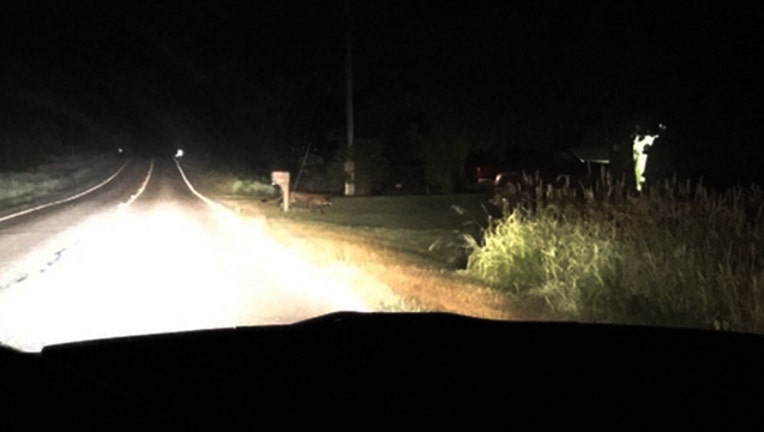 The DNR verified the cougar's presence from a photograph taken by a Haslett resident. In the photograph, which was taken on June 21, 2017, the cougar is just behind the mailbox on the right side of the road.

The individual reported that he spotted a large cat in his headlights as the animal attempted to cross a road. He captured the photograph as the cougar turned back from the road into an area of thick vegetation.

The DNR team reviewed the photo and visited the site by the mailbox, and determined the animal in the photo is, in fact, a cougar.

Bath Township is about 13 miles northeast of Lansing.

"Even with this verification, questions remain, especially regarding the origins of the animal," said Kevin Swanson, DNR wildlife specialist and member of the agency's Cougar Team. "There is no way for us to know if this animal is a dispersing transient from a western state, like cougars that have been genetically tested from the Upper Peninsula, or if this cat was released locally."

Cougars originally were native to Michigan, but were extirpated from Michigan around the turn of the century. The last time a wild cougar was legally taken in the state was near Newberry in 1906. Over the past few years, numerous cougar reports have been received from various locations throughout Michigan. Until this time, all confirmed sightings or tracks have been in the Upper Peninsula. Since 2008 a total of 36 cougar sightings have been documented in Michigan's U.P. To date, the DNR has not confirmed a breeding population of cougars in Michigan.

Cougars are protected under the state Endangered Species Act and cannot be harmed except to protect human life.

Interested landowners within the area of the recent Clinton County sighting may wish to place trail cameras on their properties. The DNR encourage citizens to submit pictures of possible sightings for verification. Observations should be reported at mi.gov/eyesinthefield. If you find physical evidence of a cougar such as scat, tracks or a carcass, do not disturb the area and keep the physical evidence intact. Please include any photos with your report.

The odds of encountering a cougar in the wild are very small, and attacks on humans are extremely rare. Should you encounter a cougar: