The Detroit police held a town hall with cops, clergy, activists and most importantly everyday residents at Detroit Edison Academy to talk solutions to the crime that so many know all too well.

DETROIT (FOX 2) - The Detroit police held a town hall with cops, clergy, activists and most importantly everyday residents at Detroit Edison Academy to talk solutions to the crime that so many know all too well.

"I observed two young men with Uzis, one killed the other one," said resident Glenda McGadney. "And this was two Sundays ago. This is a reality that I thought I would never see in my entire life. I'm traumatized."

There have been 221 homicides so far this year – and while that’s less than the same point last year, more children have been killed in 2022 than the year prior.

"The problem is, I can't interfere when two men have a legitimate beef," said Phil Sample of Ceasefire Outreach. "But when babies are getting shot, when old elderly women sitting at a table having lunch (are) getting shot, that's a problem."

"I had on the spot hiring here tonight," White said. "We've got expungement fairs that are happening, we've got educational opportunities, we've got truck driving school."

The plan also involves expanding technology like ShotSpotter — hardware that  detects and pinpoints the sound of gunfire — giving cops the chance to better respond to it.

Detroit police say that crime is down in areas where ShotSpotter is up and running.

"I am leaning toward supporting ShotSpotter," said Mary Sheffield, Detroit City Council president. "I do understand it is a tool for the police department to utilize."

Cornelius Webb, of Detroit Friends and Family, says he plans to share what he heard tonight back to the street in his community.

"Because of us, we came here, we heard a voice and we're going to take that voice back to our neighborhood," he said.

And as the message gets out, some Detroiters say the city can only move so far forward when murders remain unsolved and families, like Robin Newton’s, live without closure. Her son Demarr Newtown was murdered.

"It’s been two years now, going on three," she said. "I know it is hard, the police have a lot on their hands, I get that part. But don't just leave us hanging."

Chief White said the turnout Thursday showed that residents have not thrown in the towel when it comes to crime in the city. 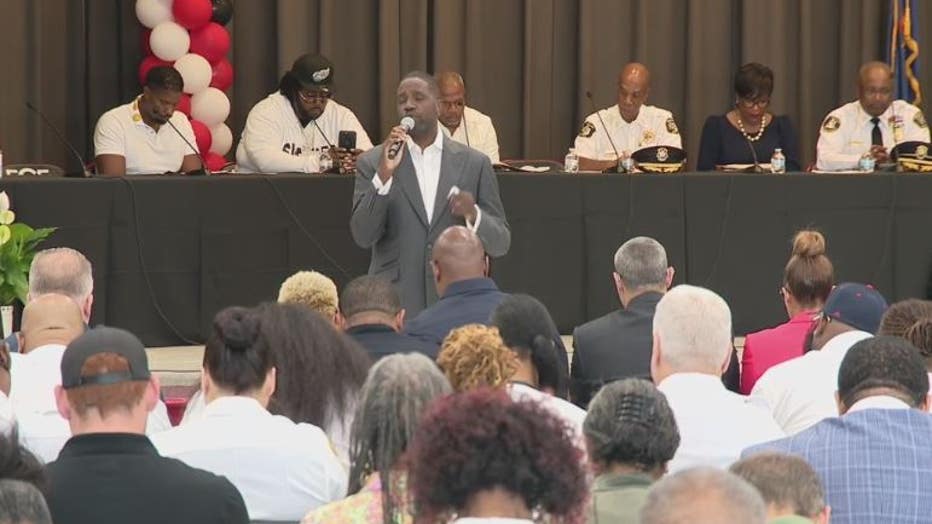