MACOMB CO. Mich. - Along the Red Run Drain in Warren is a disgusting overflow of flushable wipes that Macomb County says it's not responsible for and is asking Oakland County to stop.

Public Works Commissioner Candice Miller says the wipes have washed up from the drain for decades and is tired of the problem, which she says is coming from Oakland County's sewer overflow.

"It's sickening. Really, there's no other way to sugar coat it. You walk down and see all these trees full of sewer wipes," Miller said. "I love Oakland County and people of Oakland County, I don't think they realize what they're doing to Macomb and to their own drinking water supply, which all goes to lake Saint Clair."

Candice Miller, Macomb County Commissioner, says Oakland County is dumping sanitary wipes into the Red Run Drain in Warren and has done so for years.

Miller says Oakland County dumps some of the overflow at the Red Run Drain near Dequindre and Chicago, which is right on the county border. Sanitary wipes are a big problem because they are not biodegradable.

"These are personal wipes. Whether they're personal wipes you use when you go to the bathroom, baby wipes, makeup wipes - we all have these wipes everywhere," Miller said.

On Monday, after being fed up, she put up a video showing trees covered with wipes. She says a few hours later, Oakland County crews cut some of them down.

She says the county is working on a $30 million project to stop the wipes. 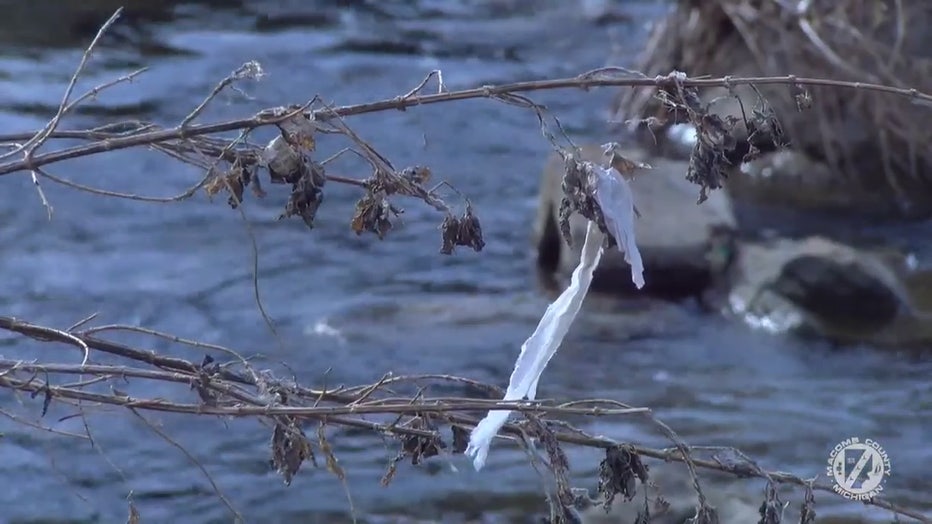 According to Miller, the Department of Environment Great Lakes and Energy (EGLE) does allow dumping sewer overflow. EGLE told FOX 2 they were looking into the issue.

FOX 2 also reached out to Oakland County for comment but did not get a statement.