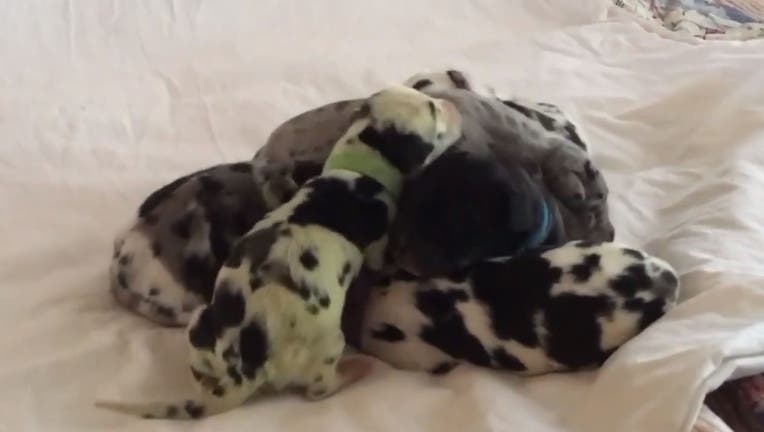 “It was so shocking when she was born," the puppy's owner said. "Luckily, I had recently read an article about a green dog. So at least I knew what was going on." (Caddy Williams via Storyful)

FOX NEWS - One of these things is not like the others.

When a Great Dane in Colorado gave birth to a litter of pups, her owner couldn’t believe her eyes: Most of the newborn dogs looked normal, but one of the small animals had green fur.

“It was so shocking when she was born," Caddy Williams told KRDO. "Luckily, I had recently read an article about a green dog. So at least I knew what was going on."

Williams initially thought the puppy had dark, black fur, the New York Post reports. She later realized, however, that the fur was actually green, a highly unusual color for any dog. 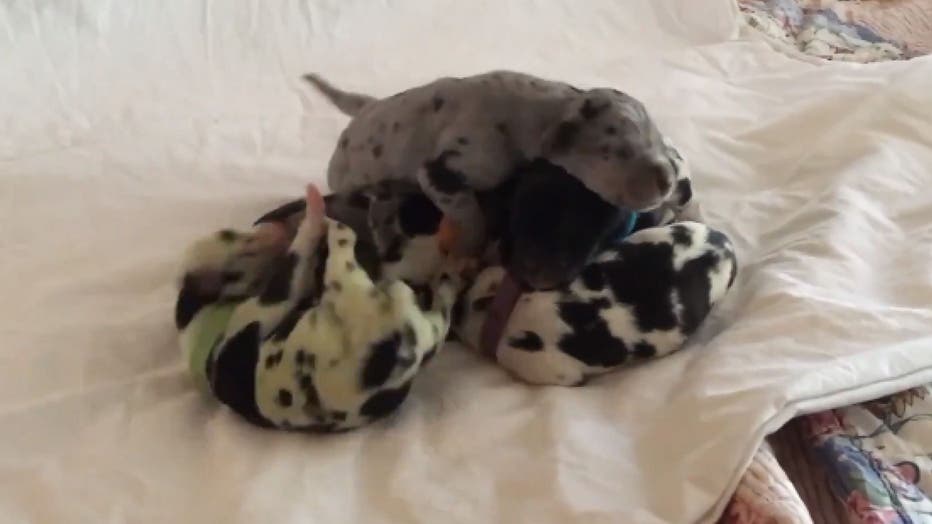 A chemical found in bile, called biliverdin, could be responsible for dying the pup’s fur green, according to reports. (Caddy Williams via Storyful)

“It was dark," Williams said of her initial assumption. "So I finally got out my phone flashlight -- and she was green!"

While the pup’s unique hue might look adorable, it possibly has a gross cause.

A chemical found in bile, called biliverdin, could be responsible for dying the pup’s fur green, the New York Post reports. Apparently, the chemical can be present in the womb and could alter the coloring of the animal.

Fortunately, the condition isn’t dangerous in any way. It also isn’t permanent and will reportedly fade away over time.

Regardless of its color, having a dog can actually be good for the owner's health. Certain studies show that canine companions could actually help you live longer — especially if you’re a stroke or heart attack survivor who lives alone.

The research, published in Circulation: Cardiovascular Quality and Outcomes, a journal of the American Heart Association, was based on one study and a separate meta-analysis.

By the end, researchers determined those who suffered a stroke or heart attack and also owned a dog had a significantly lower risk of death from a heart attack or stroke compared to those who did not own a dog.