FLAGLER COUNTY, Fla. - The Flagler County Sheriff's Office has closed down a drug house that they say contained enough fentanyl to kill 481,000 people.

The owner of the home, identified as 39-year-old Brian Pirraglia, and a tenant of the home, 40-year-old Michael Connelly, were arrested on various drug paraphernalia charges.

During their search, deputies say they found 41.2 grams of Sulfamethoxazole and Trimethoprim, a prescription-only narcotic, were recovered, as well as used hypodermic syringes, multiple spoons with white powdery residue, a silicone smoking pipe with burnt cannabis residue, and multiple glass containers with residue. 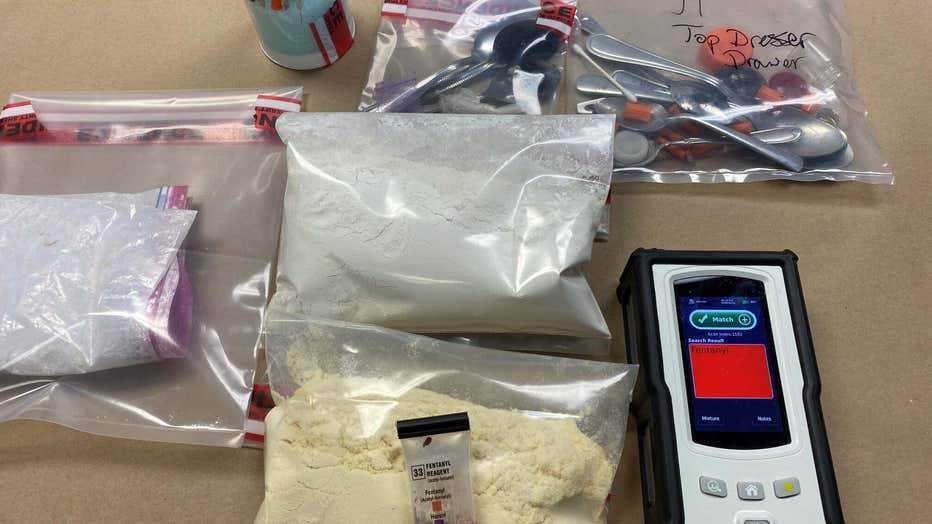 "Upon questioning, Pirraglia stated the white powdery substance in the plastic jar was ‘Protein’ and that the plastic baggie was a gift from his neighbor and he was unaware of the contents. Pirraglia advised he does not allow drugs to be sold in his home," the Flagler County Sheriff's Office said.

Both Pirraglia and Connelly have lengthy criminal histories. The home on Blasdell Court has been a neighborhood eyesore and known problem for years.

"These two are frequent guests at the Green Roof Inn and have yet to learn their lesson," Sheriff Staly said. "Between these two poison peddlers, they had enough fentanyl to kill 481,000 people, which is more than the population of Flagler and St. Johns County combined! This is another great job by our Special Investigations Unit. I’m proud of their persistence to get 916 grams of poison off our streets and of our SWAT team that safely served the search warrant."

Sheriff Staly also explained that they have raided the home in the past and were not surprised by the latest bust.

"All I’ve ever seen is deputies I know roll down the street," said retired Flagler Deputy and neighbor Dave Wilson. "It’s been a real nightmare ever since."

He added, "I hope they find some way to take over the house and fix it back up again."

Neighbors here believe even more people are linked to this home and other crimes, but they are just glad it’s all over for now.

Pirraglia and Connelly were arrested and charged with possession of drug paraphernalia. Additional fentanyl trafficking charges could await Pirraglia.

The Sheriff's Office is also investigating if the drugs are linked to a Mexican Cartel, as Sheriff Staly said that there was a recent fentanyl bust in Marion County.

"It was stamped from a cartel in Mexico. I can tell you the color and consistency – although ours was not still in block form – looked identical to me," he said. If they are linked, the Sheriff said that "t would indicate to me that the cartel has operatives in Florida."