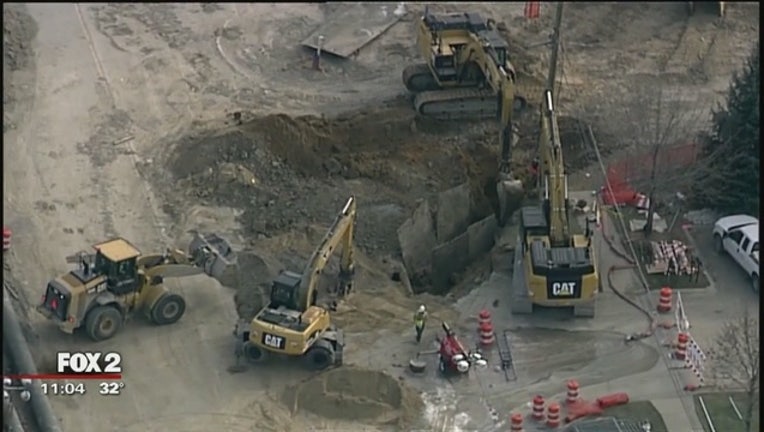 FRASER, Mich. (AP) - It likely will take until Thanksgiving to repair damage from a broken sewer line that caused a football field-sized sinkhole on Christmas Eve north of Detroit, a public works official said Wednesday.

"Certainly, by the end of the year," Macomb County Public Works chief Candice Miller said. "And by that I mean all of this done and the road, hopefully, depending on the weather."

The cost of the work will be determined Monday when a contract is awarded to one of five bidding contractors that are all from Michigan, she said. She previously estimated costs at more than $78 million. She said they also took bids to inspect the entire drainage system, about 17 miles of pipes, to assess whether more work needs to be done to underground infrastructure.

Miller made the remarks at a news conference to introduce two Michigan State Police robots, named "Lucky" and "Wolverine," that were then then sent into three houses that had been condemned to make a video inventory of the properties. The robots are normally used by the bomb squad but were sent inside to ensure workers' safety.

"The robots can do anything we can do," Michigan State Police Sgt. Ashland Bray said. "It can walk up and go down stairs, do whatever we need it to do."

Miller said the information will be used to determine fair offers to the homeowners in the hopes of avoiding lawsuits. She said a budget of about $1 million was set to condemn and purchase the houses.

"We hope to have these homes demolished very soon, within the next couple of weeks," Miller said. "They're in a very unsafe condition."