(FOX 2) - Michigan Lt. Gov. Garlin Gilchrist has made state history by becoming the first black lieutenant governor to sign a bill into law.

Gilchrist, who is Michigan's first African American lieutenant governor, enacted legislation Thursday to end a lifetime ban on felons becoming licensed insurance agents. His signature came during a bill-signing event in the rotunda of the Capitol building.

Garlin Gilchrist, who is Michigan's first African American lieutenant governor, enacted legislation Thursday to end a lifetime ban on felons becoming licensed insurance agents. His signature came during a bill-signing event in the rotunda of the Capitol building.

"I'm standing on the shoulders of giants -- Richard Austin was the first statewide elected official who's black who was the first black person to actually something into law in 1988. I'm thinking about his leadership and the leadership of so many other black elected officials and community leaders across the state, across my city of Detroit, who they have paved the way for a day like this, for a person like me," Gilchrist said.

Suffice it to say, the acting governor never thought he would be making history like this.

"I didn't know that I was going to be here two years ago. It's a tremendous honor and I take it very seriously, and I'm working to do my best," he said.

The measure he signed allows rehabilitated felons to sell insurance, which is part of a new attitude in Lansing to treat former criminals differently.

"Leaders are finally catching up to where the people are as far as saying that rehabilitation, we must honor that, we must give people a chance to succeed. We cannot define people by their biggest mistake on the worse night of their life, and instead give them opportunities to contribute," Gilchrist said.

His attitude extends to the state's new marijuana law as he embraces legislation to automatically expunge the convictions of those who broke the previous anti-pot laws. 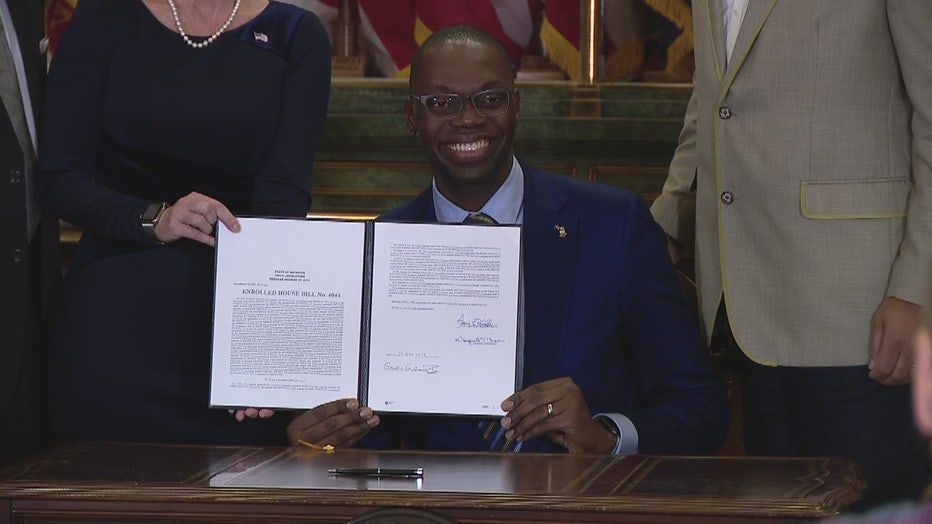 "I'm good with expunging people's records in general," he said. "We need to recognize that the people of Michigan spoke with a clear voice in terms of how we should treat possession of marijuana."

Legislation is pending here to wipe those pot records clean.