LANSING, Mich. - State House and Senate Republican lawmakers want to commit more than a billion dollars to Michigan's school districts as part of their 'Return to Learn Plan"

On Tuesday, Chairs of the House and Senate education committees were joined by leadership in the Michigan legislature to showcase the GOP's plan for helping school districts ready up for the 2020 school year.

With a multi-billion dollar budget deficit facing the state, school districts worried about what kind of losses they'd be taking as officials look at where to make cuts. Currently, the School Aid fund takes up 26% of the state budget - the second-largest expense.

Speaking from the steps of the capitol building, Rep. Pamela Hornberger (R-Chesterfield Twp) and Sen. Lana Theis (R-Brighton) detailed how funding heading for school districts would be split. Districts would receive $800 per student as part of $1.2 billion in already-acquired federal funding. There would also be a one-time hazard and overtime payment for teachers of $500 and another $80 million dedicated funding for helping intermediate school districts implement distance learning plans and safety measures.

Under the GOP's plan, school districts would also be required to work with adjacent health departments to develop health and safety standards that can fit best with the district as it pertains to COVID-19. 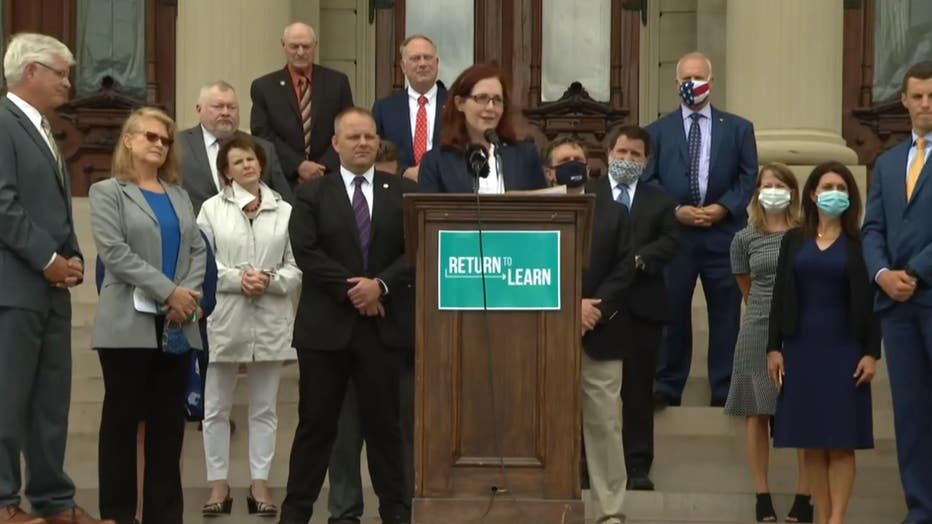 “As schools eye the fall to resume classroom instruction, the health and safety of students will be front and center,” Rep. Kathy Crawford (R-Novi) said. “COVID-19 has affected every corner of our state, some regions more than others. If we’ve learned anything from this public health crisis, it’s that health and safety decisions should be made at the local level rather than statewide sweeping mandates."

School districts would also be allowed to start "whenever is best for them" according to a release issued by a party spokesperson. Additionally, it limits the use of snow days and advocates for benchmark assessments to make sure students are keeping up with the curriculum

Last week, Gov. Gretchen Whitmer said schools could resume in-person learning which had originally been suspended when class was canceled and her stay home order was announced. Allowing in-person learning was among restrictions that would be lifted once the state entered stage 4 of its MI Safe Start Plan.

The lifted restrictions on in-person learning were to be expected as most universities and school districts have begun releasing academic plans of what their 2020 fall and spring semesters will be like.

Similar to what the University of Michigan announced on Monday, a combination of in-person and remote learning will be available to all students enrolled. On June 9, Detroit Public Schools released its own reopening plan.

The hybridized learning will be a first for many schools and likely bring some learning curves of their own when they start.