Cuomo to step down

Andrew Cuomo will resign after more than a decade a governor of New York. He leaves Albany amid a sexual harassment scandal and more.

NEW YORK - Saying "I will step aside," Gov. Andrew Cuomo announced on Tuesday that he will resign as governor of New York as a sexual harassment case against him builds. He will leave office in two weeks.

Before he announced his resignation, Cuomo said a recently released report on harassment accusations against him contains "serious issues and flaws that should concern all New Yorkers." The governor claims there was a bias and a lack of fairness in the report.

For months, the Democrat has seen his political clout dwindle and his ambitions for national office evaporate as he became embroiled in controversies, including disturbing accusations of sexually harassing women and troubling allegations of covering up data on coronavirus deaths linked to nursing homes.

Attorney General Letitia James announced on August 3, 2021, that an investigation into Cuomo found that he sexually harassed several current and former state employees, many of whom were young women.

The women had accused Cuomo of subjecting them to inappropriate kisses and touching or inappropriate sexual remarks. The nearly five-month investigation, conducted by two outside lawyers who spoke to 179 people, found that the Cuomo administration was a "hostile work environment" and that it was "rife with fear and intimidation."

Cuomo served one term as state attorney general before being elected to the state's top job in 2010. He was elected twice more by wide margins but will step down before matching the gubernatorial tenure of his late father, Gov. Mario M. Cuomo, who served from 1983 to 1994.

After vowing for several months to stay in office, Gov. Andrew Cuomo announced on Monday that he will step down in two weeks.

Under state law, Lt. Gov. Kathy Hochul will take over as governor and is entitled to finish his term, which ends on Dec. 31, 2022. Hochul, a former congresswoman from western New York, joined Cuomo's ticket in 2014 when he sought election to his second term. (Robert Duffy, who was Cuomo's lieutenant governor for one term, declined to seek reelection that year.)

Hochul is set to address the public and take questions from reporters on Wednesday from the state Capitol in Albany.

'I will step aside': Gov. Andrew Cuomo announces he will resign

New York Gov. Andrew Cuomo announced that he is going to resign from office. Watch the entire statement when he said he was going to step aside.

Several women have accused Cuomo, 63, of various kinds of engaging in sexually suggestive statements, unwanted advances, inappropriate touching, and more. Most of the women worked for Cuomo either in his administration as governor or in his time as President Bill Clinton's housing secretary.

One allegation was made by an unnamed aide who said the governor summoned her to the Executive Mansion, his official residence in Albany, to help him with his cellphone in late December, The Times Union of Albany reported. She was alone with Cuomo when he closed the door, reached under her shirt, and fondled her, the newspaper reported, citing an unidentified source with direct knowledge of the woman's accusation.

Other women have come forward publicly with stories of their experiences with Cuomo.

Lindsay Boylan, a former aide who ran unsuccessfully in the Democratic primary for Manhattan borough president, in December accused Cuomo of sexually harassing her "for years" and that many people "saw it, and watched."

Lt. Gov. Kathy Hochul will become governor when Andrew Cuomo steps down. She will need to quickly address many challenges and questions.

"I could never anticipate what to expect: would I be grilled on my work (which was very good) or harassed about my looks," Boylan tweeted. "Or would it be both in the same conversation? This was the way for years."

Another former aide, Charlotte Bennett, said Cuomo asked her about her sex life and said he was open to "dating anyone over 22."

Ana Liss, a former aide to the governor, told a Rochester-based TV station that Cuomo was flirtatious with her but she thought it was harmless. However, she said the governor's office was a hostile, toxic work environment that harmed young women.

The attorney general's investigation substantiated many of the accusations and also revealed publicly for the first time allegations that the governor sexually harassed a female state trooper on his security detail.

Some of Cuomo’s top aides altered a state Health Department report to obscure the true number of people killed by COVID-19 in the state's nursing homes, according to reporting by The Wall Street Journal and The New York Times.

Melissa DeRosa, the governor’s right hand, and other aides pushed state health officials to edit the July report so only residents who died inside long-term care facilities and not those who became ill there and later died at a hospital were counted, according to the news reports.

After graduating from law school in 1982, Cuomo became the campaign manager for his father's first (and successful) race for governor. He then served as a top aide in his father's administration for about a year.

Cuomo then served as a prosecutor in the Manhattan District Attorney’s Office from 1984 to 1985 and joined a New York City law firm until 1988, according to one of his official bios.

In 1996, President Clinton tapped Cuomo for the top job at the U.S. Department of Housing and Urban Development HUD, where Cuomo had served as an assistant secretary. The Senate unanimously confirmed Cuomo, who was sworn in as the secretary in January 1997, according to his archived HUD bio, and served through the end of Clinton’s second term. 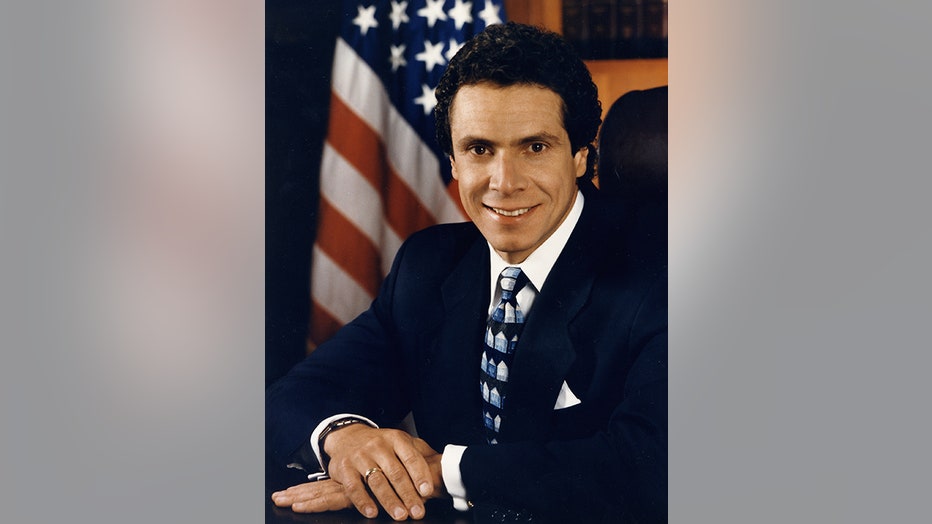 Cuomo first ran for governor in 2002, hoping to take on Gov. George Pataki, the Republican who had unseated his father in 1994. After initially doing well in fundraising, Cuomo eventually withdrew from the race.

Four years later, Cuomo ran for attorney general and won, succeeding the popular Eliot Spitzer, who was elected governor. During the campaign, Cuomo was asked if he wanted to be the governor and not the attorney general but he answered that the office was a good fit for him.

Just over a year later, Spitzer resigned due to a prostitution scandal, and Lt. Gov. David Paterson was elevated to the top job. Paterson enjoyed goodwill for a time but was later bogged down by his administration’s own scandals and missteps. His popularity plunged, prompting President Barack Obama in 2009 to urge him to not run for election to his own term. And Cuomo reportedly considered challenging him in a primary.

Paterson, New York's first Black governor, pledged to stay in the race but later withdrew from the campaign. That opened the door for Cuomo, who enjoyed high poll ratings, to finally run and win the job he had coveted for years.

Andrew Mark Cuomo was born in Queens in 1957 to Mario and Mathilda Cuomo. He has four siblings. Cuomo attended Fordham University and Albany Law School. He was admitted to practice law in New York in 1984, according to the state’s court system database.

Cuomo was married to Kerry Kennedy from 1990 to 2005. They have three daughters, Mariah, Cara, and Michaela. Kennedy is the daughter of the late Robert F. Kennedy and the niece of slain President John F. Kennedy.

Cuomo was then in a romantic relationship with chef and TV personality Sandra Lee for more than a dozen years. They lived together in Westchester County until 2019.

The New York State Assembly continues to move forward with an impeachment probe. The Judiciary Committee, the panel considering whether to file articles of impeachment, will meet two more times on August 16 and 23. Then, there will be public hearings, according to the committee's chair.

The committee will likely decide whether to recommend articles of impeachment by early next month. A simple majority of the assembly's 150 members is required to impeach the governor. He would then go on trial before a jury of 62 state senators and the seven judges of the Court of Appeals.