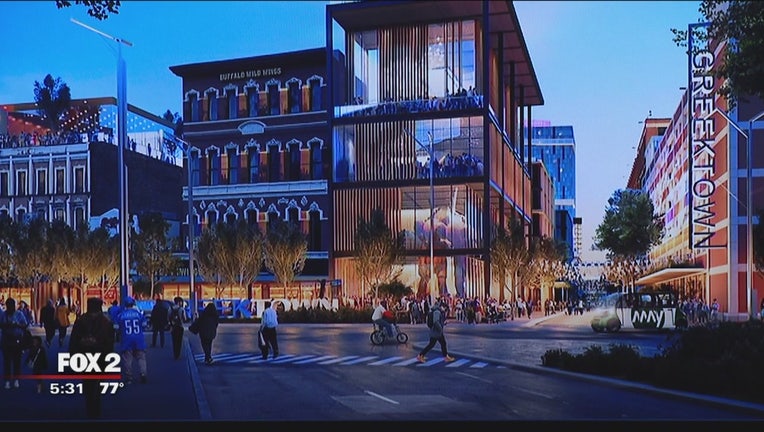 DETROIT (FOX 2) - Greektown could be looking at a major face lift in the coming months and years.

It's neighborhood commission has established a long term plan to modernize the cultural sector of Detroit.

"I think that is wonderful. It's already pretty good, but to get an uplift, that will be great for the city and for all the people that tour here," said Brigitte Bradley, who was in Greektown on Wednesday.

The plan, formally titled the Greektown Neighborhood Framework will work to develop better parking, more retail and office space, more housing options. The city estimates the area will see a variety of housing units numbering near the 1,000 mark. That would include apartments, condos and maybe a few townhouses.

Everything the Greektown Neighborhood Partnership has laid out remains pretty broad however. Specificity will follow in the coming months.

"Much of that is yet to be determined," said John Warner of the partnership. "Like I said, this is a vision for the future and the details of that implementation will be taking shape over the next months and years."

Taking priority in the plan is filling vacant buildings on Monroe Street. One spot highlighted in that push is the area in front of Buffalo Wild Wings, known as the Randolph Plaza. Organizers hope to break ground soon. It would serve as the "front door" into Greektown.

"It's gonna be a gateway from the rest of downtown into this neighborhood and we hope that it can serve as a wonderful public space that people can enjoy and really a beacon that welcomes people onto Monroe street." said Warner.

Public space has increasingly been emphasized in the city's attempts to modernize its streets. Offering more community spaces would increase walkability in the downtown area. One visitor said she was "blown away" by the transformation the city has already undergone, and was excited to see more on the way.

Some of the public space enhancement would include other "gateway spots" in the neighborhood, along with historic marker that would celebrate the area's cultural history.

"I think it's a great juxtaposition of old and new. You've got a lot of new restaurants combined with some ones that have been here for quite a long time," said Jennifer Bebe, who was visiting from Chicago.