NEW YORK - U.S. craft store Hobby Lobby was ordered this week to forfeit a rare, ancient artifact it purchased from an international auction house for $1.6 million in 2014 after it was discovered that the sale had occurred under "a false provenance," the Department of Justice announced.

The artifact, known as the Gilgamesh Dream Tablet, was illegally transported to the U.S. in 2003 and 2014, authorities said. The tablet originated in the area of modern-day Iraq and is around 3,600 years old. It depicts a portion of the Sumerian poem Gilgamesh, which is considered one of the world’s oldest works of literature.

The tablet was sold to Hobby Lobby by the international auction house to be displayed at the Museum of the Bible in Washington, D.C., founded by Hobby Lobby president Steve Green. It had been sold with a false provenance letter several times before Hobby Lobby purchased the artifact, authorities said.

Representatives from Hobby Lobby did not immediately respond to a request for comment. 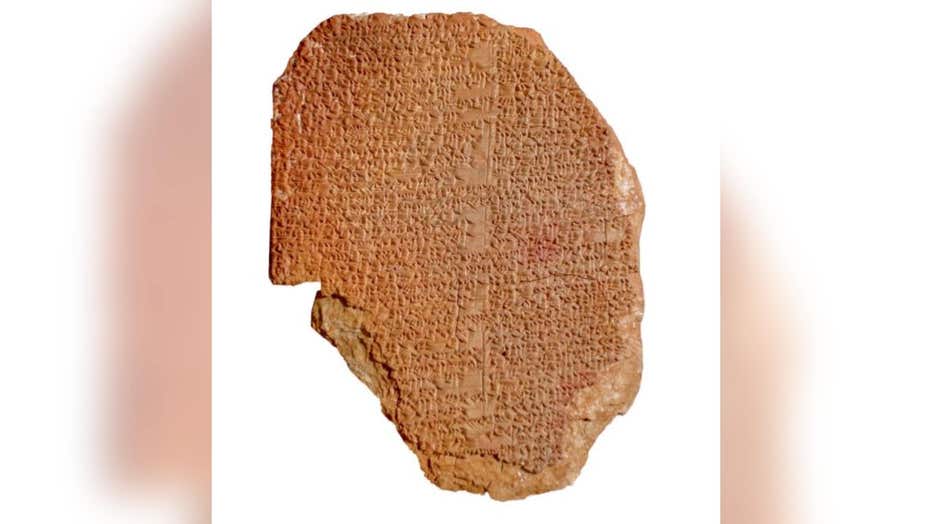 The government’s investigation revealed that an antiquities dealer first purchased the tablet in 2003 from the family of a coin dealer in London and had it shipped to the U.S. without properly declaring the contents as required, authorities said. At the time, it was "encrusted with dirt and unreadable."

After the tablet was imported and cleaned, experts recognized it as bearing a portion of the Gilgamesh poem, written in the Akkadian language.

The antiquities dealer later sold the artifact with a letter that wrongfully claimed the tablet had been inside a box of miscellaneous ancient bronze fragments purchased in an auction in 1981, the DOJ said.

"This false letter traveled with the tablet as it was sold several times in different countries, and a later owner provided the letter to the Auction House in London. In 2014, the Auction House sold the Gilgamesh Dream Tablet to Hobby Lobby in a private sale and an Auction House employee carried it on a flight from London to the United States and then transferred it to New York," authorities said in a statement.

Authorities seized the tablet in 2019. Representatives for the Museum of the Bible have said the institution supports returning the tablet to Iraq.

Acting US Attorney for the Eastern District of New York Jacquelyn Kasulis said the forfeiture represents "an important milestone on the path to returning this rare and ancient masterpiece of world literature to its country of origin."

"The trafficking of cultural property and art is a lucrative criminal enterprise that transnational criminal organizations exploit to make a profit, regardless of its destructive consequence to cultures around the globe," Fitzhugh added.

In 2017, Hobby Lobby agreed to pay a $3 million federal fine and forfeit thousands of ancient Iraqi artifacts smuggled from the Middle East that the government alleged were intentionally mislabeled. Prosecutors said Hobby Lobby also agreed at the time to adopt internal policies for importing cultural property and training its personnel.