What is an impeachment inquiry?

Impeaching a president is often misunderstood to mean his removal. It actually means the House has voted to bring one or more articles of impeachment and send the process forward.

WASHINGTON, D.C. - The U.S. House of Representatives impeached President Donald Trump for abuse of power and obstruction of Congress, with the two articles of impeachment now heading to the Senate for trial.

Impeachment is the political equivalent of an indictment. If Trump is acquitted by the Republican-led chamber, as expected, he would have to run for reelection carrying the enduring mark of impeachment on his purposely disruptive presidency.

However, House Speaker Nancy Pelosi threw the process into confusion by refusing to say when or whether she would send the articles of impeachment to the Senate for a trial.

At a news conference held immediately after the vote, Pelosi said “we’ll see what happens” when asked if she would send the articles to the Senate. She said that House Democrats could not name impeachment managers — House prosecutors who make the case in a Senate trial — until they know more about how the Senate will conduct a trial.

Asked if she could guarantee she would send the articles, she said “that would have been our intention” but that they will see what the Senate decides.

House Democrats have been declaring Trump "betrayed the nation" in his actions toward Ukraine as they pushed toward historic proceedings that will help define his presidency and shape the 2020 election.

Pelosi ordered an impeachment inquiry of Trump in September after an intelligence community whistleblower came forward with a complaint reportedly relating to Trump’s communications with the president of Ukraine.

Trump's machinations to avoid culpability from the Russia investigation fed into Democrats' push for the probe, but that inquiry came to an indistinct conclusion, with troubling episodes of presidential behavior uncovered by special counsel Robert Mueller but no charges recommended for obstructing justice or conspiring with Moscow in its audacious efforts to tip the 2016 U.S. election to Trump.

Support among Republicans in Congress for Trump has held during the impeachment inquiry, but there are hints of strain amid broader frustrations about the president's handling of foreign policy.

Rep. Francis Rooney, R-Fla., made waves by saying he was keeping an open mind about impeachment. The next day, he announced he would retire at the end of his term.

Still, most Republicans and Trump administration officials have pushed back, claiming that nothing improper occurred on the July 25 call with Ukrainian President Volodymyr Zelensky.

They've suggested the call was harmless. A Republican staff memo, laying out talking points for upcoming public hearings, asserts that the rough transcript of the call "shows no conditionality or evidence of pressure."

Democrats had pressed on in their impeachment inquiry into Trump. Both the House Intelligence and Judiciary committees have held hearings and proceedings. 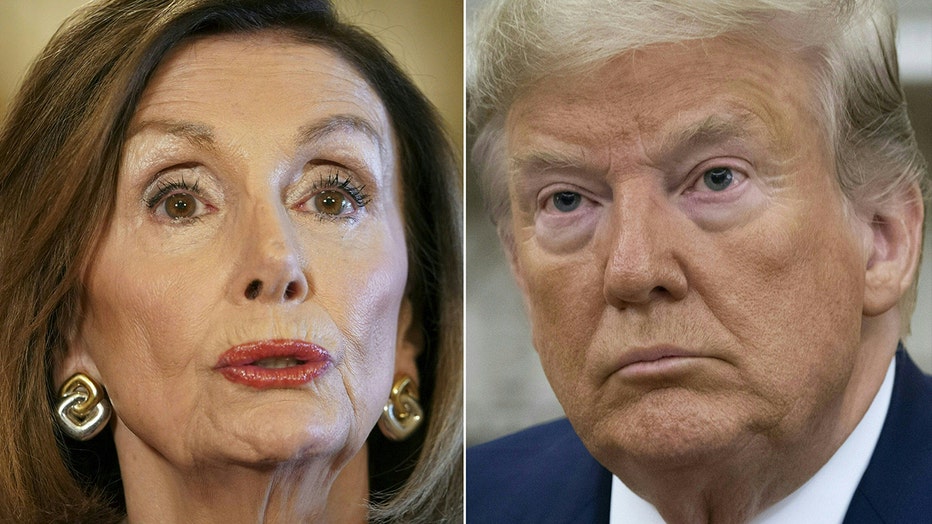 Left: US Speaker of the House Nancy Pelosi. Right: US President Donald Trump. Amid mounting allegations of abuse of power by Trump, Pelosi announced the start of a formal impeachment inquiry. ( MANDEL NGAN,SAUL LOEB/AFP/Getty Images)

Impeachment has happened before:

The House initiated impeachment proceedings more than 60 times in U.S. history, but less than a third of those cases have resulted in full impeachments.

Only two presidents have been impeached: Andrew Johnson in 1868 and Bill Clinton in 1999. Both won acquittal in the Senate.

Richard Nixon, who was the subject of impeachment proceedings, resigned from office in 1974 when it looked certain that the House would impeach him and his prospects in the Senate appeared dire.

Some Democrats in Congress have long wanted to kick-start the constitutional process to remove Trump, despite the slim odds of success. But they lacked a critical mass and Pelosi's support.

But following Pelosi's push for the inquiry and an official House vote to move forward, the public heard testimony from several witnesses involved in the Ukraine phone call on July 25.

All testimony so far has been heard by the House Intelligence Committee, which issued a report on its findings on Dec. 3. The committee had nine witnesses ranging from top diplomats to White House aides testify in November, providing more insight into how the Ukraine call happened and who knew about it.

Based off the Dec. 3 report, the Judiciary panel held its own hearings in early December on whether Trump’s dealings with Ukraine and his administration’s attempts to block the investigation constitute impeachable offenses.

Here’s what impeachment proceedings entail and what to expect as the House moves forward with its impeachment inquiry against Trump:

The President, Vice President and all Civil Officers of the United States, shall be removed from Office on Impeachment for, and Conviction of, Treason, Bribery, or other high Crimes and Misdemeanors.

Impeaching a president is often misunderstood to mean his removal. It actually means the House has voted to bring one or more articles of impeachment and move the process forward. No president has been ousted by impeachment.

As laid out in the Constitution, the House of Representatives possesses the sole power to impeach, while the Senate acts as the sole court for impeachment trials and the Chief Justice of the Supreme Court presides over the trial.

Before the House authorizes an impeachment inquiry, the House Judiciary Committee typically conducts an investigation in which it holds hearings on proposed articles of impeachment and votes on whether to approve them. If the committee votes to pass the articles, they are then passed on to a vote by the full House.

If the full House votes to approve any of the presented articles, those articles are then sent to the Senate to go to trial.

The Senate, however, is not obligated to take these articles to trial.

In Trump’s case, there is a distinct possibility that the Republican-controlled Senate will refuse to try the case presented by the House. Senate Majority Leader Mitch McConnell, R-Ky., has shown in the past that he is not particularly beholden to expectations, such as his refusal to hold a hearing on Supreme Court nominee Merrick Garland, who was nominated by former President Barack Obama.

If the Senate does take the presented articles of impeachment to trial, the House appoints members by resolution to manage the ensuing trial on its behalf. These members effectively act as the prosecutors in the trial and tend to be selected from the Judiciary Committee.

After the trial — which can sometimes last for months — the Senate holds a vote. A two-thirds majority is required for a conviction, which would result in the official in question being removed from office.

This story was reported from Los Angeles. The Associated Press contributed to this report.