Western leaders said the plane appeared to have been unintentionally hit by a missile just hours after Iran launched around a dozen ballistic missiles at two U.S. bases in Iraq.

TEHRAN, Iran - Iran on Friday denied Western allegations that one of its own missiles downed a Ukrainian jetliner that crashed outside Tehran, and called on the U.S. and Canada to share any information they have on the crash, which killed all 176 people on board.

Western leaders said the plane appeared to have been unintentionally hit by a surface-to-air missile just hours after Iran launched around a dozen ballistic missiles at two U.S. bases in Iraq to avenge the killing of its top general in an American airstrike last week.

“What is obvious for us, and what we can say with certainty, is that no missile hit the plane,” Ali Abedzadeh, head of Iran's national aviation department, told a press conference.

“If they are really sure, they should come and show their findings to the world" in accordance with international standards, he added. 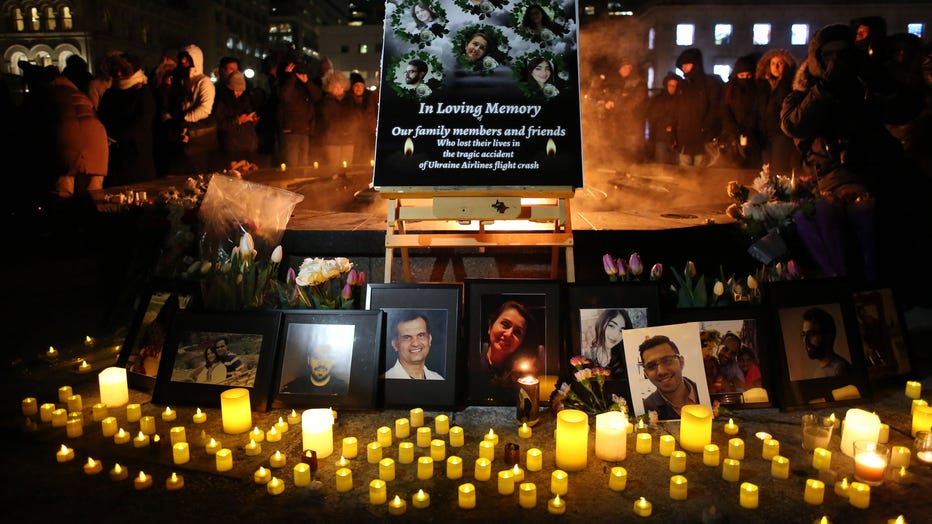 An altar with photographs of the victims who were killed in a plane crash in Iran is seen as people gather around for vigil on Jan. 9, 2020 in Ottawa, Canada. (Photo by Dave Chan/Getty Images)

Hassan Rezaeifar, the head of the Iranian investigation team, said recovering data from the black box flight recorders could take more than a month and that the entire investigation could stretch into next year. He also said Iran may request help from international experts if it is not able to extract the flight recordings.

The ballistic missile attack on the bases in Iraq caused no casualties, raising hopes that the standoff over the killing of Gen. Qassem Soleimani would end relatively peacefully, though Iran has sent mixed signals over whether its retaliation is complete.

If the U.S. or Canada were to present incontrovertible evidence that the plane was shot down by Iran, even if unintentionally, it could have a dramatic impact on public opinion in Iran.

The Iranian public had rallied around the leadership after the killing of Soleimani last Friday, with hundreds of thousands joining the general’s funeral processions in several cities, in an unprecedented display of grief and unity.

But sentiments in Iran are still raw over the government’s crackdown on large-scale protests late last year sparked by an economic crisis exacerbated by U.S. sanctions. Several hundred protesters were reported to have been killed in the clampdown.

Those fissures could quickly break open again if Iranian authorities are seen to be responsible for the deaths of 176 people, mainly Iranians or dual Iranian-Canadian citizens. Iran still points to the accidental downing of an Iranian passenger jet by U.S. forces in 1988 — which killed all 290 people aboard — as proof of American hostility.

U.S., Canadian and British officials said Thursday it is “highly likely” that Iran shot down the Boeing 737, which crashed near Tehran early Wednesday. U.S. officials said the jetliner might have been mistakenly identified as a threat.

Canadian Prime Minister Justin Trudeau, whose country lost at least 63 citizens in the downing, said “we have intelligence from multiple sources including our allies and our own intelligence.”

“The evidence indicates that the plane was shot down by an Iranian surface-to-air missile,” he said.

The U.S. officials did not say what intelligence they had that pointed to an Iranian missile, believed to be fired by Russian Tor system, known to NATO as the SA-15. But they acknowledged the existence of satellites and other sensors in the region, as well as the likelihood of communication interceptions and other similar intelligence.

Western countries may hesitate to share information on such a strike because it comes from highly classified sources.

Videos verified by The Associated Press appear to show the final seconds of the the ill-fated airliner, which had just taken off from Iran early Wednesday.

In one video, a fast-moving light can be seen through the trees as someone films from the ground. The light appears to be the burning plane, which plummets to the earth as a huge fireball illuminates the landscape.

Someone off-camera says in Farsi: “The plane has caught fire. ... In the name of God, the compassionate, the merciful. God, please help us. Call the fire department!” 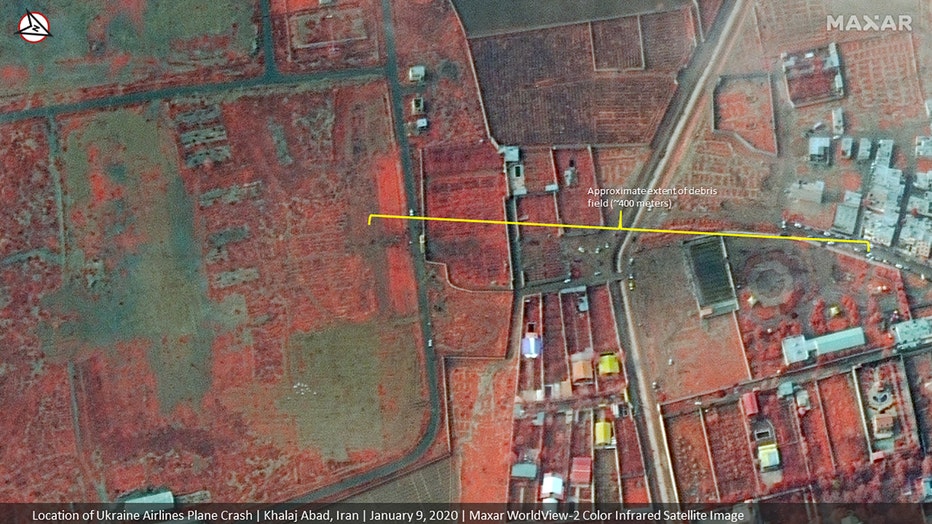 Ukraine's President Volodymyr Zelenskiy said “the missile theory is not ruled out, but it has not been confirmed yet."

In a Facebook post, he reiterated his call "on all international partners" — the U.S., Britain and Canada in particular — to share data and evidence relevant to the crash. He also announced plans to discuss the investigation with U.S. Secretary of State Mike Pompeo later on Friday.

Ukraine's Foreign Minister Vadym Prystaiko tweeted that he and the president met with U.S. Embassy officials Friday and obtained "important data" about the crash. The minister didn't specify what kind of data it was, but said it would be “processed by our specialists.”

In an interview with Fox News' Laura Ingraham aired late Thursday, Pompeo said the crash may have been caused by a “mechanical failure” but that commercial airliners need to know if it is safe to fly into and out of Tehran.

“If the international community needs to shut down that airport, so be it,” he said. “We need to get to the bottom of this very, very quickly.”

Germany’s Lufthansa airline said it and subsidiaries are canceling flights to and from Tehran for the next 10 days as a precautionary measure, citing the "unclear security situation for the airspace around Tehran airport.” Other airlines have been making changes to avoid Iranian airspace.

Iran's state-run IRNA news agency quoted Foreign Ministry spokesman Abbas Mousavi as saying Iran "has invited both Ukraine and the Boeing company to participate in the investigations.” He later said a 10-member Canadian delegation was heading to Iran to assist victims' families.

The National Transportation Safety Board said late Thursday that it would “evaluate its level of participation," but its role could be limited by U.S. sanctions on Iran. U.S. officials have also expressed concern about sending employees to Iran because of the heightened tensions.

Under rules set by a United Nations aviation organization, the NTSB is entitled to participate because the crash involved a Boeing 737-800 jet that was designed and built in the U.S.

The French air accident investigation agency, known by the French acronym BEA, is also taking part in the probe. The plane’s engine was designed by CFM International, a joint company between French group Safran and U.S. group GE Aviation.

A preliminary Iranian investigative report released Thursday said that the airliner pilots never made a radio call for help and that the burning plane was trying to turn back for the airport when it went down.

Those findings are not inconsistent with the effect of a surface-to-air missile. Such missiles are designed to explode near aircraft, shredding them with shrapnel. There is no need to score a direct hit, and a stricken plane may look like it is turning back when in fact it is disintegrating.

Abedzadeh, the senior aviation official, said authorities have recovered two black box flight recorders, saying they are “damaged” but readable. They may shed further light on what caused the crash.