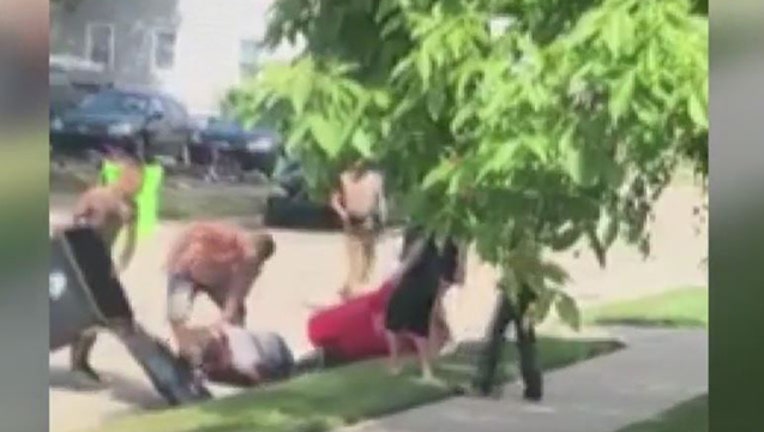 ROSEVILLE, Mich. (FOX 2) - A ruckus in Roseville was caught on camera.

What began as an argument involving teens and young adults erupted into a brawl as a stepfather squared up with a 17-year-old. Kids with hammers were showered with pepper spray.

And a man ordered his dog to attack the teen's friend and as he tries to fight it off, the man's friends and family pummel him.

"The dog was let go because someone yelled knife, ok? If the dog wasn't let go where would I be? I would either be dead or in the hospital with a stab wound," said William LaFave.

It all happened Wednesday afternoon on the 17000 block of Lowell. Will LaFave says the bad blood stems from the 17-year old's relationship with his stepson's younger sister.

He wanted to settle it with his fists, but the teen brought his friends along. As LaFave fought with the 17-year-old, two boys with hammers try to hit the teen but were pepper sprayed.

"I don't know about that," LaFave said.

FOX 2: "I saw kids run out with hammers. You don't know who those kids were?"

The videos are racking up hundreds of shares and views on social media and could end up being a snare to everyone involved.

"At the end of the video you see all them chasing me because I was trying to help my boss who's getting jumped down the street," said LaFave.

"All of us neighbors who were nearby came out to see what was happening (and) could clearly see that those kids who were getting bitten by a dog did not have a knife, brass knuckles or anything," said Ezeike. "Will, the adult, threw the first punch, hitting a teenage kid."

Some of the other young men involved in the brawl did not want to comment. Police would not comment but said the investigation is ongoing – but have made no arrests.