FOX 2 - The Falcons used a late Lions turnover and a fourth-down touchdown pass to steal a 27-23 win Friday and spoil the Detroit preseason home opener.

A 21-yard touchdown pass with 1:30 left on fourth down by Atlanta rookie Desmond Ridder to undrafted rookie Jared Bernhardt did the trick - set up from a fumble by Lions backup quarterback David Blough with two minutes left.

A last-second drive stalled at midfield for the Lions with Blough's last pass landing in the end zone near a covered Tom Kennedy.

Late in the fourth quarter the Lions defense made a stop on third down and short, stuffing Atlanta on a run play by defensive lineman John Cominsky, himself a former Falcon.

Backup kicker Riley Patterson made a 28-yard field goal to put the Lions up 23-20 with six minutes left.

Second overall pick Aidan Hutchinson got off to a quick start, tackling Falcons running back Damien Williams for a loss on the first Atlanta possession. The U-M and Dearborn Divine Child product later drew a holding penalty on the same drive.

The Lions opened the scoring on a 9-yard touchdown run by D'Andre Swift set up by a pair of catches from Amon-Ra St. Brown for 29 yards from Jared Goff. The quarterback played just the opening series, going 3-for-4 for 47 yards.

Atlanta tied it 7-7 at the end of the first quarter with a 6-yard scoring run by quarterback Marcus Mariota.

The Lions went up 10-7 with a 46-yard field goal from Austin Seibert in the second quarter.

Atlanta went up 14-10 with a 1-yard touchdown pass from rookie QB Desmond Ridder to Parker Hesse.

Former Michigan standout and newly acquired veteran Devin Funchess caught a 1-yard TD pass from Tim Boyle giving the Lions a 17-14 lead with 47 seconds left in the half.

The Falcons tied it 17-17 on a 47-yard field goal by Younghoe Koo as time expired. 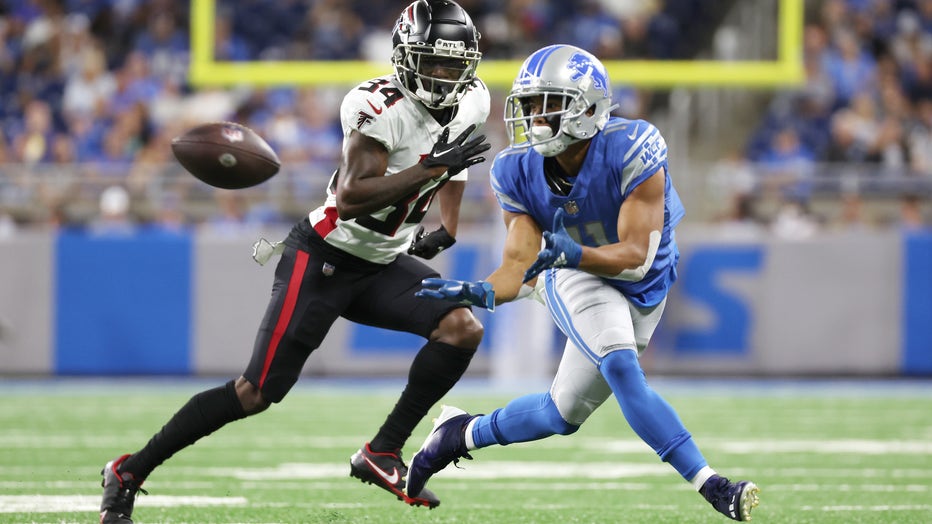 DETROIT, MICHIGAN - AUGUST 12: Kalif Raymond #11 of the Detroit Lions makes a second quarter catch in front of Darren Hall #34 of the Atlanta Falcons during a NFL preseason game at Ford Field on August 12, 2022 in Detroit, Michigan. (Photo by Gregory