DETROIT (FOX 2) - The 2022 Detroit Lions season got off to a frustrating start on Sunday. For at least one fan, he didn't see the Lions nearly complete a comeback after he left the game a bloodied mess following a fight in the seats.

Multiple fights broke out at Ford Field on Sunday off the field - including one that is an all out brawl on the street outside the arena after the game. But for one fan inside the stadium, it ended with him leaving the stands with blood dripping from his face.

The fan, who is not known at this time, can be seen walking up the stairs with blood dripping from his face.

Another video uploaded - which contains STRONG profanity - shows at least two fans swinging fists in a brawl in the stands of the upper-level section of Ford Field. It's impossible to tell if this is the same fight or not.

Meanwhile, on the field, the Lions nearly completed a come-from-behind win but couldn't come up with a key stop in the fourth quarter and lost to the Eagles 38-35. 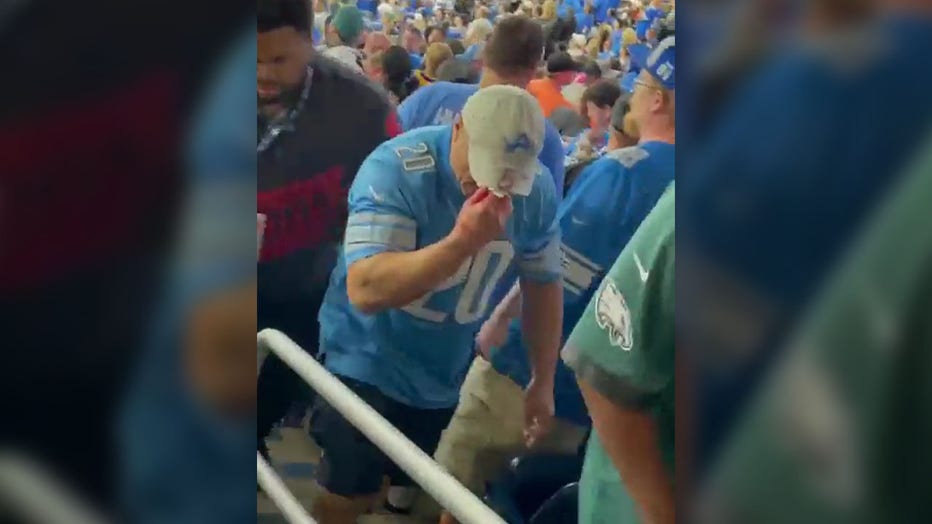 A Lions fan leaves the season opening game with a bloody nose after a fight in the stands at Ford Field. The Lions wound up losing to the Eagles 38-35. Screenshot Credit: @_AOwens via Storyful