Caucus volunteers will still be relying to some extent on technology to assist in counting and reporting results, though, and like Iowa, they will have paper backups.

LAS VEGAS - Nevada Democrats are hoping to avoid a repeat of the chaos that ensnared the Iowa caucuses, as voters gather across the Silver State on Saturday to make their presidential preferences known. Iowa's process cratered this month following a rushed effort by state Democrats to deploy a mobile app for caucus volunteers to report results. Democrats in Nevada were going to use the same app developer as Iowa did, but quickly sidelined those plans. They will still be relying to some extent on technology to assist in counting and reporting results, though, and like Iowa, they will have paper backups.

Questions and answers about Nevada's preparations:

HOW SIMILAR IS THE NEVADA CAUCUS PROCESS TO IOWA'S?

Very similar, which is why there are concerns about a potential repeat of the problems. As in Iowa, the Nevada caucuses are run by the state Democratic party. By contrast, primaries and general elections are run by government officials. And just like in Iowa, precinct captains in Nevada will be asked for the first time to report results from every stage of the process, revealing how the results are calculated.

One important difference is that Nevada has had four days of early voting, in which some 75,000 voters have already cast ballots. It's a considerable number given 84,000 people attended Democratic caucuses in 2016. It is the first time the Nevada caucuses have had early voting. On Saturday, those votes will be merged with caucus votes at neighborhood precincts — a complicated step that some election observers say could trip up volunteers running the caucuses.

COULD NEVADA EXPERIENCE THE SAME PROBLEMS THAT HOBBLED IOWA’S CAUCUSES?

In Iowa, the inability of some caucus organizers to download the app on their phones, or to use it successfully, triggered a flood of calls to the party’s hotline and dramatically slowed the process of reporting results. And a coding issue within the mobile app muddied the data that was sent in, creating discrepancies that halted the reporting of initial results for nearly 24 hours.

In Nevada, caucus organizers will not need to download anything, but they will be asked to work on an iPad and navigate a Google form designed to integrate early voters into the in-person caucus process and calculate results. The Google app and iPads are trusted commercial tech tools, but election experts have warned that deploying any technology late in the process, like Nevada did, increases the risk of problems. Paper records of the early vote will be available if needed.

Volunteers say that hands-on training with the iPads and the Google form wasn’t even available until late Tuesday, giving little time for people, particularly those who are not tech-savvy, to practice. 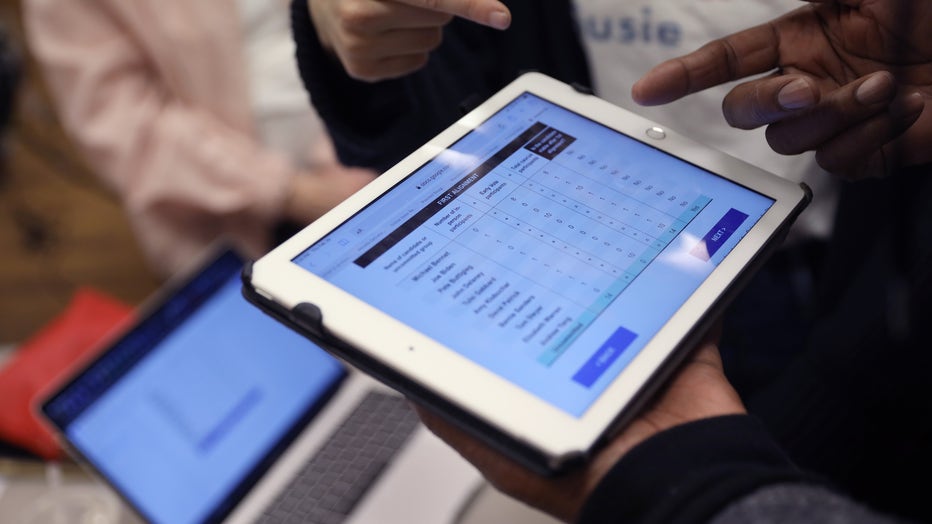 HOW WILL THE CAUCUSES BE CONDUCTED?

Caucuses are different from primary elections. In a primary, voters go to the polls, cast ballots and leave. At a caucus, voters gather at local precincts and declare support for their chosen candidate. Then, some have an opportunity to switch sides.

Here, in four steps, is how it will unfold in Nevada.

1. The “first alignment:” Voters arriving at their caucus site will fill out a card that lists their first choice, and those results will be tabulated.

2. Switching if necessary: Caucus-goers whose first-choice candidate fails to get at least 15% of the vote can switch their support to a different candidate. If these voters don’t choose another candidate, their vote won’t count in the final alignment.

WHAT RESULTS WILL DEMOCRATS RELEASE OUT OF THE CAUCUSES?

There will be three sets of results:

—Tallies of the “first alignment” of caucus-goers;

—The total number of delegates to county conventions won by candidates.

The first and final alignment results aren’t new, but this is the first time the party has made them public.

HOW WILL THE AP DECLARE THE WINNER OF THE NEVADA CAUCUSES?

The AP will declare the winner of the Nevada caucuses based on the number of county convention delegates each candidate receives. That’s because Democrats choose their overall nominee based on delegates. The other results will provide valuable insights into the process and the strength of candidates, but the county delegates have the most direct bearing on the metric Democrats use to pick their nominee. So that’s the number to watch.

However, the AP will report all three results as they are released.

It's possible. Party officials have said they will be guided by accuracy over speed. Factors that include the integration of early votes into the process and potentially high turnout, could affect the tabulation and timing of results. Early voting is a complicated step that Iowa did not attempt, and there’s been some uncertainty about how early voters would be included in later stages of the caucus process.

If everything goes smoothly with the iPads and the Google forms, this part of the process could go quickly. But if volunteers are left to rely on complex instructions and doing math by hand, it could slow everything down.

WHY ARE DEMOCRATS MAKING THIS CHANGE?

The new rules were mandated by the Democratic National Committee as part of a package of changes sought by Bernie Sanders following his loss to Hillary Clinton in the 2016 presidential primaries. The changes were designed to make the caucus system more transparent and to make sure that even the lowest-performing candidates get public credit for all the votes they receive.—-

This story corrects a question on declaring a winner to Nevada caucuses, not Iowa caucuses.