MACOMB COUNTY, Mich. - "Have you ever texted and driven?" asked the instructor.

"We're all guilty of it - which by the way, you just ran a red light," he continued, narrating a rather poor performance by one teen driver.

It wasn't just red lights that were run at L'Anse Creuse High school in Macomb and Clarenceville High School in Livonia. Stop signs were hit, foliage was crushed. It was a mess.

"It was very hard to concentrate on where I was going," said Madison Meyers, a student. "And I couldn't really see that well in it."

"I didn't do that well in the simulation," said Brendan Mahoney, another student. "I hit a tree and a stop sign - ran a couple of red lights."

Teens from two metro Detroit high schools got to simulate just how distracted their driving becomes while texting.

It was chaos in the Professionals Encouraging Educational Reforms (PEER) driving simulator Monday, when the folks showed teens, safely, just how impaired their driving was when they become distracted.

"In five seconds, traveling 55 MPH, you went the whole length of a football field while looking at your phone," said Julie Piotrowski, of the PEERS Foundation. "it's very serious. You can lose family members just by being on your phone."

Distracted driving, which isn't limited to just texting and driving but anything where your eyes or hands are taken from their appropriate places in the vehicle and your focus is diverted elsewhere, kills 10 teens per day. 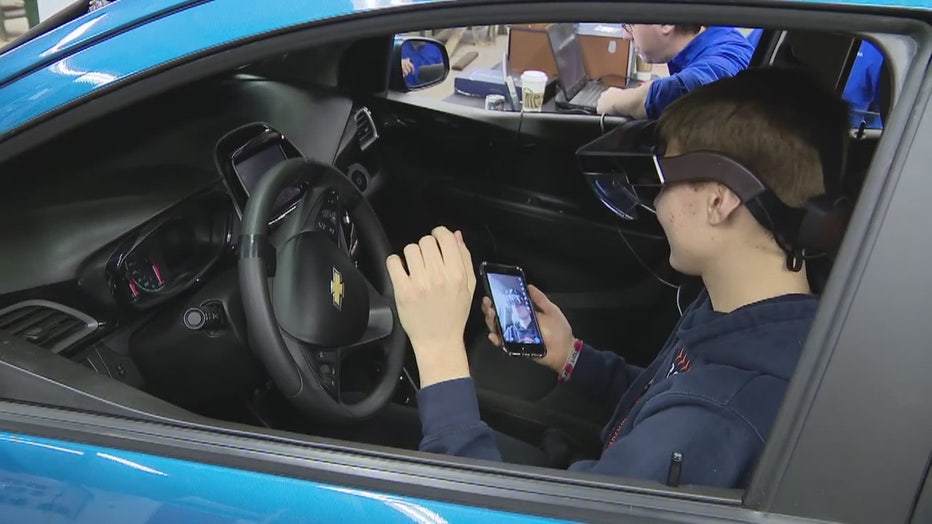 Despite the horrific statistics, the National Highway Traffic Safety Administration reports the number of deaths related to distracted driving crashes fell by 12.4 percent from 2017 to 2018. Even with the positive numbers, they aren't anywhere close to where they should be. Which is why PEERS is traveling to high schools around the region, teaching kids about just how dangerous is to be distracted while behind the wheel.