LANSING, Mich. - Michigan's Attorney General is expected to request the courts shut down the Line 5 pipeline that stretches beneath the Straits of Mackinac after damage had been reported to part of the pipe last week.

Enbridge Energy, the company that owns the gas pipeline that stretches from Ontario, Canada to Wisconsin, decided to allow the west leg to continue operating after concluding problems with anchors holding down the structure's pipeline wasn't an issue.

Sources confirmed with FOX 2's Tim Skubick that Attorney General Dana Nessel would request a temporary restraining order from the courts to turn off the line and allow more time for a state review.

State to ask courts to temporarily shut down Line 5

After reporting damage to part of the Line 5 pipe along the Straits of Mackinac, Enbridge determined it was safe to reopen part of the pipeline. Going against the wishes of Gov. Whitmer, The Michigan Attorney General said she would request the courts temporarily shut down the pipeline until the state can further review damage

Last Thursday, the company said during seasonal maintenance that officials had discovered an anchor support holding down the west side of the pipeline had shifted, prompting the company to notify state officials and shut down the line. The news prompted calls from Gov. Gretchen Whitmer, Nessel, and environmental advocates to close the pipeline.

In a statement issued Monday, Whitmer said she backs Nessel's action against Enbridge.

“I fully support Attorney General’s action today on Line 5. Enbridge resumed operation of the pipeline through the Straits of Mackinac without any explanation of the cause for the damage to the pipeline structure or plan to prevent it from happening again," Whitmer said. "Moreover, Enbridge has not timely complied with the state’s request for full and complete information and resumed operation without even consultation. This brazen disregard for the people of Michigan and the safety and well-being of our Great Lakes is unacceptable.”

The damage to the pipeline did not result in a spill. However, it's the potential for a disaster like that to happen that drove much of the discussion in recent years.

Line 5 has been a controversial subject for many public officials and environmentalists in Michigan. Its ambiguous future at the time of the last gubernatorial election was of much debate during the midterms.

Enbridge released a rebuttal saying that it believes the court position by Nessel is "unsupportable."

It said, in part:

"Enbridge believes the temporary restraining order and preliminary injunction sought by the Attorney General of Michigan is legally unsupportable, unnecessary, and will be vigorously opposed by Enbridge.

"As part of its thorough maintenance and inspection program, Enbridge first noted a disturbance to an anchor support on the east leg last Thursday and immediately shut down both legs of the Line 5 dual pipelines crossing the Straits of Mackinac as a precautionary measure.
The east leg pipeline remains shut down, while the west leg was restarted after a thorough review and consultation with our safety regulator.

"Line 5 is a critical source of 540,000 barrels per day of propane and crude oil supply for Michigan and surrounding areas that make up the regional supply network for the State, producing transportation fuels and consumer goods. Line 5 has operated reliably and safely in the Straits since 1953 and continues to do so today." 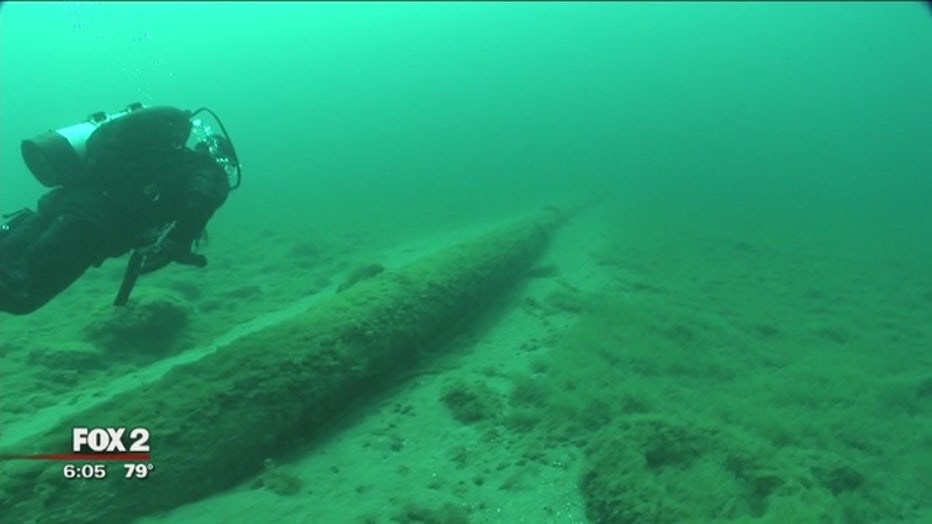 "How many close calls do there need to be before the threat of Line 5 is removed from the Straits of Mackinac?" said Sean Hammond, Policy Director at Michigan Environmental Council. "The fact that this damage was only discovered due to seasonal maintenance, shows once again that Enbridge cannot be trusted to monitor the line and protect our Great Lakes."

The natural gas and oil pipeline features two legs, and east and west line, that runs parallel to each other across the lakebed. According to a statement from Enbridge posted over the weekend, an inspection from a Remote Operated Vehicle concluded it was safe to reopen the west leg on Saturday, determining there was no damage done to it.

"The issue with the screw anchor assembly observed on Thursday is isolated to the east leg which we will continue to investigate and evaluate over the weekend. As we have verified that the west leg is not affected, we resumed normal operations on that line today at approximately 2 p.m. Eastern Time. The east leg will remain shut down. Our federal regulator, PHMSA (Pipeline and Hazardous Materials Safety Administration), has no objections to this plan."

On May 27, the company noted a coating issue that resulted in segments of the east leg of Line 5 requiring maintenance to "bare metal spots" along the pipe.