MIDLAND, Mich. - Sometimes the world's craziest creations come from the most unusual circumstances.

"Turns out, if you leave it going long enough, you just get random videos that play," said Maxton Herst, a student at Bullock Creek High School. "When we saw it, it was playing a time-lapse of the record for the world's largest pyramid."

It would take years after that fateful viewing but Herst, 18, would eventually galvanize his school's robotics club to build the world's unofficial largest pyramid made out of toilet paper. Measuring 16 feet 3 5/8 inches and totaling 27,424 rolls of toilet paper, the unorthodox structure took 16 hours to build over a two-day period. 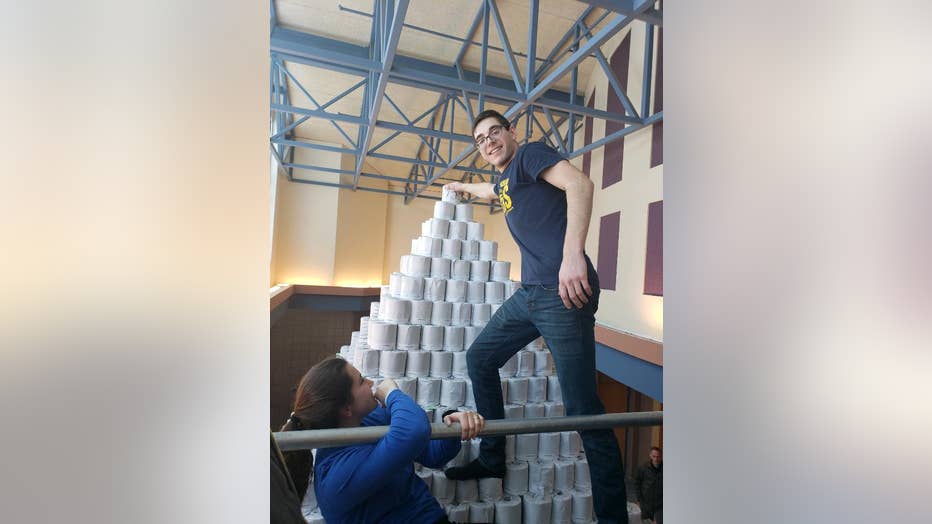 Herst admits one could connect the necessities of planning in the robotics field to tackling the endeavor, but that wasn't the team's main goal.

"We just did this as publicity for the robotics club," he said. "We're spreading the word of what we do in robotics and how it works."

With a club budget of $60,000, the 25-member team just entered their six-week build season. Receiving the competition challenge on Jan. 4, the team must construct a robot that can shoot a ball into a goal six feet off the ground. But before the team could tackle that challenge, they would spend hours on Dec. 30 and 31 constructing an ode to Egypt that no ancient civilization could have ever predicted.

Constructed in the high school's atrium, the club used the help of a local construction service to build scaffolding that ensured a safe building period. Instead of paying for a member of the Guinness World Record team to come out and inspect the pyramid, the team is doing the data themselves, with architects measuring its dimensions.

But make no mistake, Herst is confident the team has made their mark.

The team plans on selling the toilet paper back to the community in an effort to fundraise. If they make enough money, they'll donate the rest of what's available to those in need of toilet paper.

If you'd like to donate to the robotics club, you can email them here: Blitzcreek3770@gmail.com