On The Road to Holland

It's May and that means it's tulip time in Holland, Michigan! Come with us as we hit the road to Michigan's premier tulip destination with Meteorologist Lori Pinson.

HOLLAND, Mich. (FOX 2) - Some came for the romance. Others for a return to their roots.

After a chilly start to spring, even a peek into what warmer weather has to offer and the beauty of emerging flowers can be enough to make the trip to west Michigan. There, tulips by the tens of thousands grow in Holland, Michigan.

Each street in the Dutch-rooted city is exploding with color. Even the residential areas are lined with fiery vibrancy. The city has been celebrating its Dutch heritage with tulips since 1930. At the first ever tulip festival almost a 100 years ago, 250,000 flowers were on display.

The explosion of flowers this year comes with a bit something extra: immersion. One exhibit known as the Tulip Immersion Garden, designed by Ibo Gulsen combined color and to contrast to create a history of the tulip.

The designer charted the flower's origins from Turkey to the Netherlands to Holland.

"This is the first time at tulip time that where we bring the immersive experience of tulip in a completely different way to experience tulips. Normally we look down on them as we walk down the street or in the park. Now we raise them a couple of feet higher, so they're more on eye level," said Gulsen. "So you can better experience the tulip.

For Marla and Jim Goranson, attending the festival puts smiles on their faces.

"The romance you know with the tulips, it's spring, new life. It's just breathtaking here," said Marla. 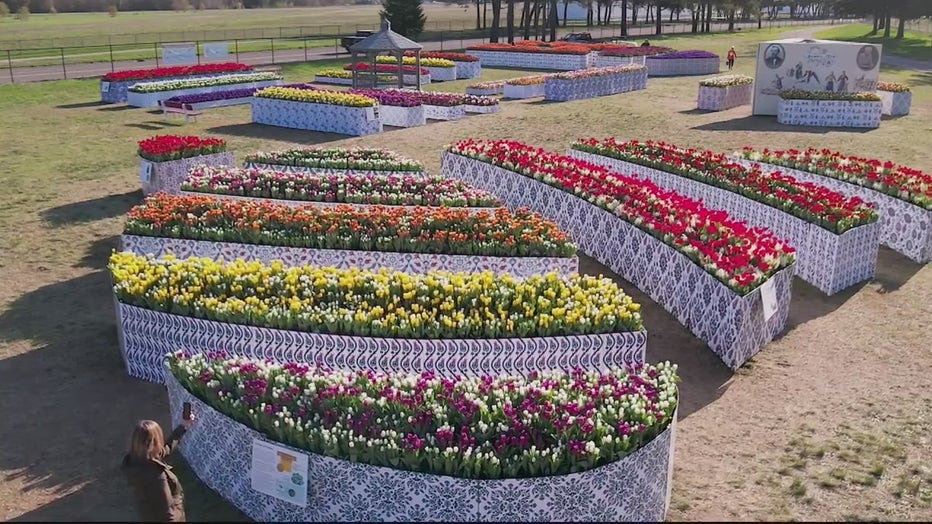 Just like the festival's interest in its own history, many of the guests in Holland also have ties to the area's older characters.

"These two young little boys are great great grandsons of Fred Oldemulders, a Holland wooden shoe carver," said Rich Gippers. "So they just love to visit from Lansing and enjoy the tulips."

Shoe carvers were key members of industry decades ago when they created and molded the wooden clog, a hardy shoe that was originally created in the 13th century to protect the feet of factory workers, farmers, and fishermen.

They soon took on a more ceremonial role when they were painted and given to potential brides as a proposal.

Beyond just the flowers, there is also a collaborative art project that highlights traditional Dutch dresses with a more modern take. The photography exhibition is its first display in the U.S.

"What I hope what will hit them emotionally is that they keep an open mind and that they are open for this message that we should actually look after each other because it's a very vibrant but also difficult world we're living in this moment," said Rem Van Dem Bosh, a Dutch photographer behind the exhibit.

"I hope what they will take from it from them is to keep an open perspective and also be always friendly to your fellow mankind," he added.

The tulip festival will be ongoing through this weekend.