RIVER ROUGE, Mich. - It's not exactly beach weather, but your 2020 self will be glad when warmer weather returns to Michigan after reading this news.

The next time you dip your toes in water near the Rouge River, rejoice its clean water you're immersing yourself in.

"If people are swimming and coming into contact with the water, they have less possibility of contracting any bacterial disease," said Majid Khan, with the Great Lakes Water Authority. "As of March 29, 2019, I am glad to say every single drop of the water that we treat here before we put it into the river, is completely disinfected - meaning all the bacterias are killed."

October isn't quite beach weather, but make no mistake that when the time comes to enjoy the rivers and lakes outlining the state, that water will be clean enough to jump into. Every year, 60 days of heavy rainfall washes into water bodies without being disinfected. However, the Great Lakes Water Authority took advantage of equipment and put it to use during those heavy rainfall periods, and have since disinfected every drop of water that's entered the Rouge River - saving the region hundreds of millions of dollars.

In a normal year, there are about 60 days where rainfall is too high for water and sewage infrastructure to handle. On these days, the Great Lakes Water Authority is unable to treat the water and bacteria its carrying as it finds its way into area water bodies.

Prior to that March date, officials became unnerved by measurements of bacteria. Levels were growing to a dangerous amount that could be harmful to people and area wildlife.

However, the water authority has devised a plan to reduce those levels at a cost only a fraction of what it could have been.

"We were able to come up with a plan of using existing infrastructure and that would reduce the cost or avoid the cost from $300 million to $44 million," said Khan.

The Great Lakes Water Authority initially devised a plan to expand upon existing facilities that would help them handle the water volume on rainier days. That plan would have cost taxpayers $300 million. Instead, the new plan is to retro-fit existing facilities at a sixth of the cost.

The Rouge River hasn't always been the beneficiary of such careful oversight. Prior to federal funding being allocated in the 90's or the passing of the Clean Water Act in 1972, there was very little stopping residents, businesses and factories from directly and indirectly polluting the channel.

This pollution coalesced in 1969 when the river caught fire after a torch fell on an oil slick due to a spill from a refinery that sat on the river. Since then, a region-wide effort to clean up the river has resulted in one of the greatest restorations of the environment in recent memory.

READ MORE: In 1969 the Rouge River burned. 50 years and more than a billion dollars later, life has returned to the water 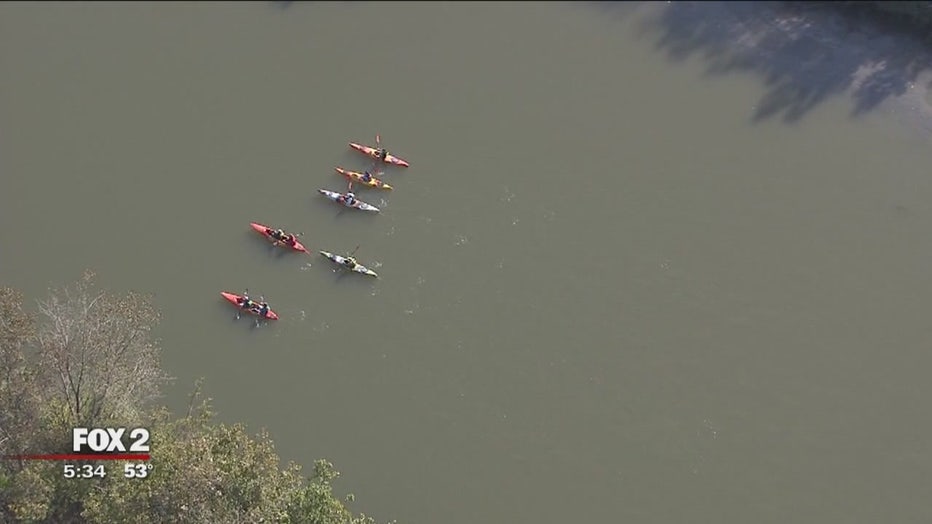 That means fewer beach closings due to elevated bacteria levels and an improved state of habitats that line the river's shorelines.