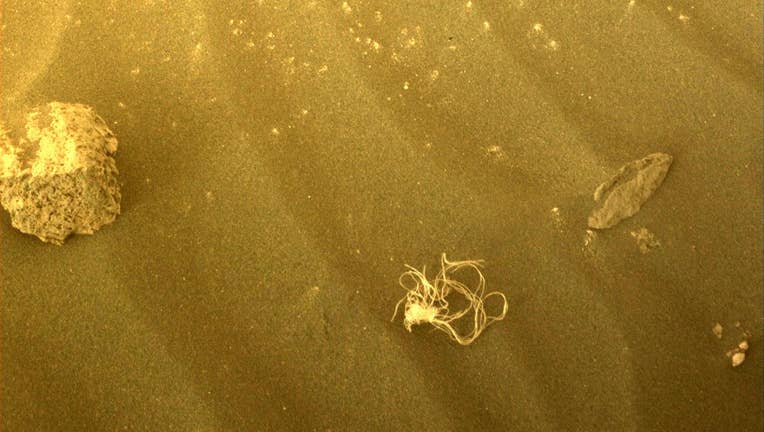 NASA's Mars Perseverance rover acquired this image of the area in front of it using its onboard Front Left Hazard Avoidance Camera A (https://mars.nasa.gov/mars2020/spacecraft/rover/cameras/#HazCams-Engineering-Cameras). This image was acquired on Ju

As far as scientists at NASA's Jet Propulsion Laboratory (JPL) know, there are not yet yarn factories on Mars.

So, the image of what looks like a small Martian tumbleweed had some social media users asking questions.

The Mars Perseverance rover acquired the photos using the onboard Front Right and Front Left Hazard Avoidance Camera A.

One was selected by public vote to be "Image of the Week" last week.

The popular theory, confirmed by a NASA spokesperson in an email to Gizmodo, is that the stringy clump is debris from the mission.

It is not the first time "Percy" has captured an image of debris.

In June, the Perseverance team tweeted that they had spotted a piece of thermal blanket that may have come from the rover's descent stage.

NASA's Mars 2020 Perseverance Rover is heading to the Red Planet to search for signs of ancient life, collect samples for future return to Earth and help pave the way for human exploration. (Courtesy: NASA)

"That shiny bit of foil is part of a thermal blanket — a material used to control temperatures," JPL wrote. "It’s a surprise finding this here: My descent stage crashed about 2 km away. Did this piece land here after that, or was it blown here by the wind?"

Also on July 12, the team wrote the rover had collected its tenth rock core sample.