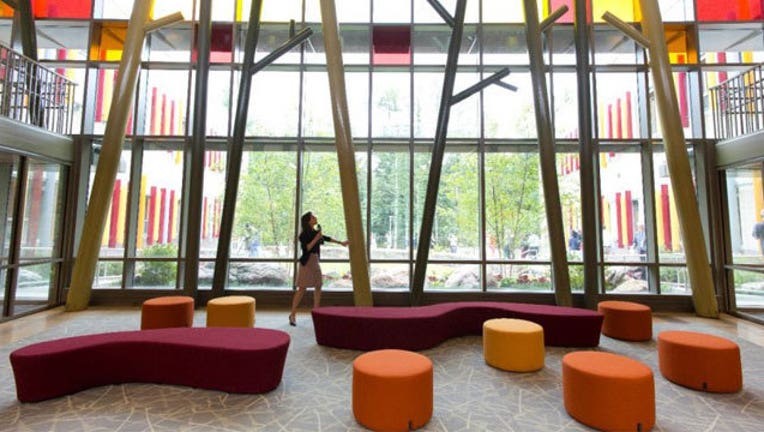 The lobby of the new Sandy Hook elementary school (AP)

NEWTOWN, Conn. (AP) — The new Sandy Hook Elementary School, built to replace the one demolished after a massacre that took the lives of 20 children and six educators, features three courtyards, study spaces designed to look like treehouses and a moat-like raingarden.

Still, many would give anything to have the old building back.

"But, let me state unequivocally that we would trade in a minute this beautiful new school for the more familiar and ancient Sandy Hook school, built in the '50s, if we could just change the past," said Pat Llodra, the town's first selectman.

The new 86,000-square-foot school opened Friday for the first time to the media and the general public, containing no obvious memorials to the 26 people who died in December 2012, but officials said it was created with them in mind.

The $50 million replacement was built on the same property but not in the old footprint. All that remains are two large concrete slabs containing dinosaur footprints that also sat outside the old building.

Local officials hope allowing people to take a look this week will make for a "quiet, respectful, and appropriate opening" on Aug. 29, Superintendent Joseph Erardi said.

Melisa Horan found touring the new school with her now sixth-grade son cathartic. He has aged out of the prekindergarten-to-fourth-grade school but wanted to see the replacement for his old school.

"Once you got down to where the driveway opened up, there was a whole different feeling, at least for me," Horan said. "It was done so respectfully and so tastefully. And the kids we toured with who are going there were just so excited to be there."

Architects and engineers held seven workshops to gather community input, including "Kids Build" sessions with the students, whose drawings can be seen on the flags that line the driveway.

"These people had their hearts ripped out. It was important to listen to them," said Julia McFadden, an architect with Svigals + Partners and the project manager.

The school was designed, officials said, to be attractive, environmentally friendly, conducive to learning and, above all, safe.

Visitors will need to pass through a driveway gate with a video intercom, across a moat-like raingarden and past two police officers and a video monitoring system to get inside. Its ground floor is elevated, making it harder to see inside classrooms from the outside. All the doors and windows are bulletproof.

In the years since the massacre, Sandy Hook students have been attending school in neighboring Monroe, which renovated a previously closed elementary school after the shooting.

There will be about 390 students enrolled this fall, and 70 of those, all now fourth-graders, were students at the old school when the shooting occurred, Erardi said. About 35 of them were in the building at the time, but none witnessed the shootings, he said.

Because of retirements and transfers, about 60 percent of the staff members from the original Sandy Hook are still with the school, he said. Others left through retirement or job changes, and a handful chose to transfer as part of their recovery process, he said.

The district will provide returning students and staff with special mental health resources to help them cope, Erardi said.

Sandy Hook Principal Kathy Gombos said she expects the transition to be difficult emotionally. But so far, she said, teachers, parents and students who have toured the new building have been smiling.

"There have been some tears, but I think after they spend about an hour or so here, they feel like it's going to be an unbelievable learning space for kids," said Gombos, whose predecessor, Principal Dawn Hochsprung, was killed that day.

Erardi said he still meets with affected families to discuss how they want their loved ones to be remembered at the school. But he said those conversations remain confidential.

There will be a more public memorial elsewhere in town. The school will be more about the future than the past.

"That is what a school should be," said Moran, "the excitement of learning and seeing all the new stuff."