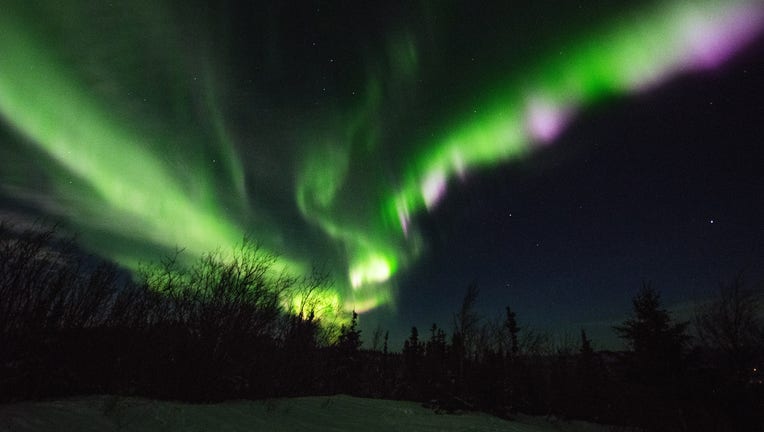 The Aurora Borealis appears in the sky on January 8, 2017 near Fairbanks, Alaska. The lights are a result of the interaction between solar wind and the earth's magnetosphere. (Photo: Lance King/Getty Images)

(FOX 2) - Northern Lights fans get ready, because Thursday is the best day to see the incredible display of greens and purples dance overhead in Michigan.

While a mass ejection exploded from the sun's surface Tuesday, the energy it emitted won't show its true colors until Thursday night, when a strong geomagnetic storm is predicted to collide over the state's atmosphere.

The National Weather Service says there are strong storm conditions predicted for the second-half of the week, but Aug. 18 will have the best display of the Aurora Borealis.

The iconic green hue that dances overhead could be seen as far south as Southeast Michigan Wednesday night. It won't extend as far Thursday night, but should be at its brightest then.

The northern lights reveal themselves when geomagnetic activity is disturbed in the atmosphere. When a coronal mass ejection forms out of the sun, it sends magnetized plasma toward into space. Some of those charged particles collide with the Earth, causing some gases in the sky to glow.

Typically harmless to Earthlings, these storms can become a problem for power systems and GPS navigation as it can disrupt manmade instruments.

Thursday's magnetic storm could be particularly pretty as the National Oceanic and Atmospheric Administration has scored the ejection a G3 - or Strong.