MONROE, Mich. - What once was a rarity in the United States and something literally not possible in Michigan has become a pastime for residents: spotting a bald eagle in the wild.

Decimated by environmental contaminants due to pollution, the bald eagle's population has rebounded in a big way across the country. Evidence of their comeback is easy to spot in Michigan and even easier at a power plant in Monroe.

"Over the years, it's gotten more and more popular and now we have to do a lottery and we have like thousands of people that want to come," Biologist Kristen LeForce said. "People try year after year, people have driven from the UP to be down here."

Once a year, just 60 people are given the opportunity to visit DTE Energy's Monroe power plant and witness the glory of our national bird, the bald eagle. Fox 2's Derek Kevra tagged along to learn why the birds congregate in the area.

LeForce is a biologist at DTE, the region's largest utility. Due to all the land the energy company owns, it's not uncommon for industry to come in contact with wildlife and their habitats. That's the realm that LeForce operates in - and the company's plant where the eagles like to live is one of the most popular sites for viewing.

It's become so popular that only 60 people are allowed to see the eagles each year.

"This phenomenon of a large number of overwintering bald eagles happens in only a couple places in the world because you need an area of lots of habitat that's away from people and open water," said LeForce. 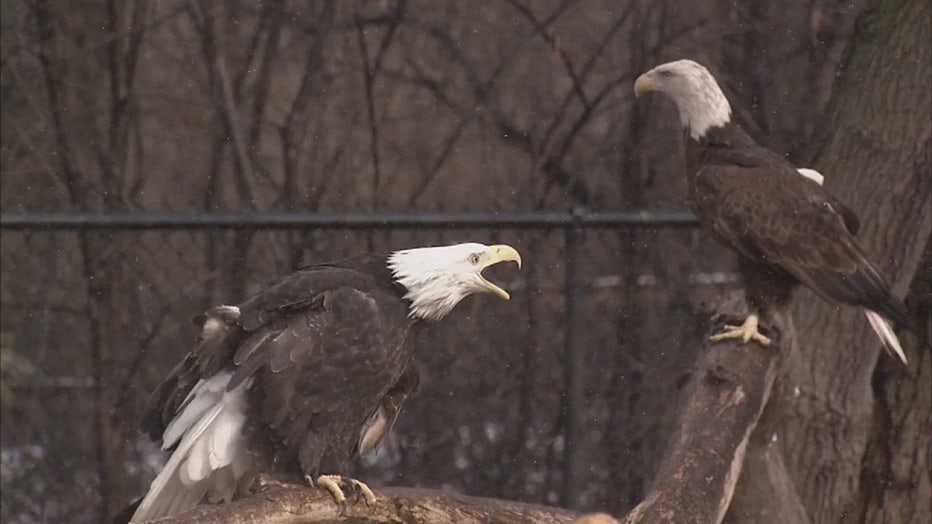 What makes DTE's plant site special is the water that is discharged is about 10 degrees "above ambient." The warmer water may not necessarily be warm, but it doesn't freeze and becomes a suitable habitat for fish to fill in - a perfect place for the eagles to feed.

"It's a Smörgåsbord board of 'they can eat just as much as they want,'" said LeForce.

Back in the 60's, the overuse of pesticides had made it difficult for the eagles to reproduce. The bird would eventually find itself on the endangered species list with only 487 nested pairs being counted in the U.S. None were in Michigan.

Since conservation efforts went into effect, there are nearly 800 nesting eagle pairs in Michigan and more than 143,000 across all 50 states.

"I thought maybe I'd see one or two, but I've seen zillions," said one onlooker. "Okay, maybe not quite that many. But it's just been amazing - wonderful. I'm a happy girl."