WOODHAVEN, Mich. - Sallah Mohamed entered a Planet Fitness on Tuesday to a cacophony of applause. Employees adorning the gym's trademark purple and yellow colors were celebrating the 23-year-old.

What Mohamed didn't know, was the gift waiting for him on the other side of that applause.

Sallah Mohamed received quite the surprise Tuesday at a Planet Fitness. The 23-year-old man from Woodhaven was paralyzed after a motorcycle accident in 2017. Since then, he's become somewhat of a local celebrity for the employees at the local gym, who have spied him lifting weights this year. As he's trained for the Detroit Free Press marathon, he's also garnered the attention of many. Which is why on Oct. 1, he was blessed with a brand new handcycle for his upcoming race.

Two years ago, Mohamed was coming from Friday Prayer at his mosque when he was paralyzed in a motorcycle accident. That 2017 accident has defined his mediums for mobility, but not his drive for accomplishment.

Earlier this year, the Woodhaven man started lifting weights at the gym. Catching the eye of those who worked there, he became somewhat of a local celebrity due to the nature of his goals - completing the Detroit Free Press Marathon later this month. Mohamed had plans to compete via handcycle - which brings us to his new gift.

"He never once gave up," said Bryan Rief, of Planet Fitness. "We couldn't be prouder. Enjoy your new equipment."

Talking to Mohamed, Rief unveiled a brand new handcycle for the athlete. Calling it a surprise would be an understatement.

"I was completely shocked, I had no idea. I thought I was just meeting with some marketing guy," Mohamed said. "I can already tell it's faster. It's only in the first gear and I can already tell. It's amazing."

It probably had that new handcycle smell. Funding this little endeavor were the pockets of employees of the gym, who pooled their money together to purchase the new bike. Mohamed initially planned on completing his race in two-and-a-half hours.

"I was just so surprised to see all this. I couldn't be happier honestly. I'm just so thankful and appreciative," said Mohamed. "This is way faster. I have no idea - if I can get under two hours, that would be amazing."

Amazing underscores the whole story. And driving Mohamed's push toward excellence is faith, family, and friends. 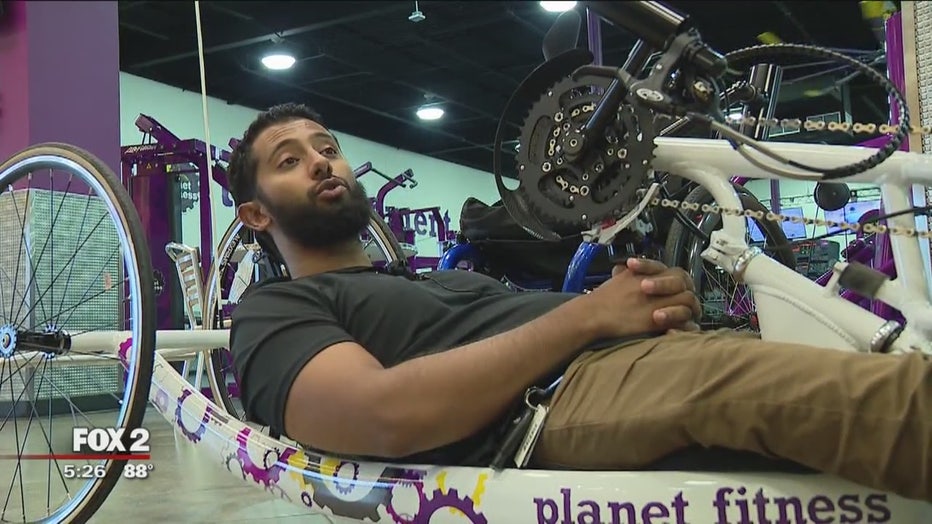 "My parents raised me right, they always taught me to be positive and through my religion, they just never look toward the negative," Mohamed said. "It's just amazing. It keeps me going every day and keeps me motivated. I always have a big smile on my face because of that."