Springfield ramps up security in wake of FBI warning

House Speaker Nancy Pelosi appears to have changed her tune when it comes to protecting the nation's capital.

Pelosi publicly thanked National Guard troops for protecting "democracy" last Wednesday after a mob of Trump supporters stormed the U.S. Capitol to object to Congress' certification of the 2020 presidential election.

The California lawmaker told a group of guardsmen "that the Capitol, our Democracy, our Constitution are safe because of your patriotism" less than a year after she scolded President Donald Trump for deploying troops to D.C. to quell the violent riots sparked by the death of George Floyd, a Black man who died May 25 while in the custody of Minneapolis police.

Pelosi's critics were quick to highlight the reversal, pointing to her June 4th press conference where she expressed concerns about "the increased militarization and lack of clarity that might increase chaos."

"By what authority do these National Guard people come in from other states?" Pelosi asked at the time.

The top Democrat expressed outrage at the sobering image of troops stationed around the Lincoln Memorial, which had been targeted by vandals earlier that month. 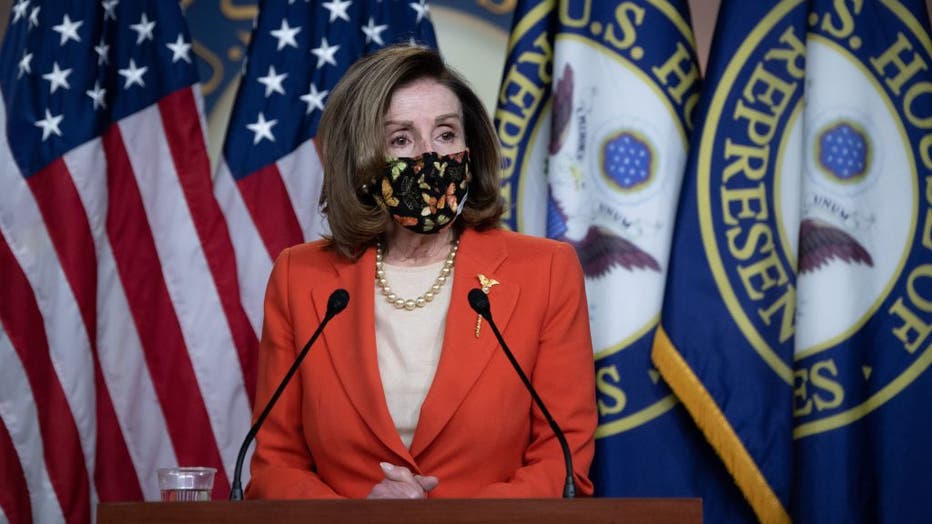 US Speaker of the House, Nancy Pelosi, Democrat of California, speaks during her weekly press briefing on Capitol Hill in Washington, DC, on January 15, 2021. - Pelosi said Friday that retired general Russel Honoré, who coordinated the Hurricane Katr

Pelosi said the deployment of troops to D.C. represented "a day of great sadness," but appears to have warmed to the idea in the days since.

"Even during this dark time in the history of America, we find reasons for hope," she wrote last week on Twitter. "It was my privilege today to personally thank members of the National Guard who are working protect our nation’s Capitol. Thank you for your commitment to our American democracy."

Officials have boosted the number of National Guard members deployed in Washington, D.C., to 25,000 in the wake of the deadly riot and continuing threats of domestic terrorism as President-elect Joe Biden's inauguration draws near.